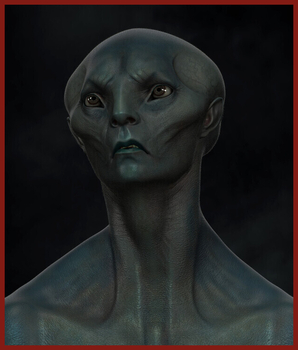 The witness who was staying at an isolated stone building near the main house was awakened in the middle of the night by the sounds of her dogs growling. She went out to investigate followed by the dogs.

Near another smaller stone building she came upon 3 giant human like figures and a smaller normal looking human. The human spoke perfect French and communicated with the witness, acting as a translator.

The giant humanoids were well built and dark complexioned, somewhat resembling Hindus, one appeared older and seemed to be the leader. He had a half marble on his forehead and wore around his neck a strap holding a box with buttons.

The normal human claimed that the aliens originally took him years ago when he had an encounter. The older giant explained that they had originally introduced the first human colony on Earth, but as a penal colony. Later they showed her their craft that had been hidden nearby. It was huge and shaped like a straw hat, and hovered silently just above the ground.

The witness was given various demonstrations of their ability to levitate and dematerialize objects. Before leaving the giants told the witness that they had come to take vegetation and mineral samples in order to evaluate the consequences of atomic explosions.

The witness claimed numerous psychic experiences after the encounter.