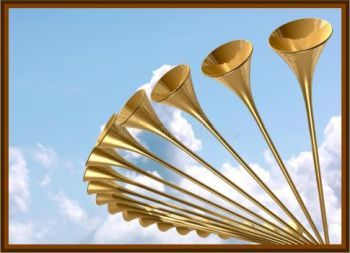 Over the past couple of months, there have been many reports of strange sounds that seem to be coming from the sky. The strange thing is, these reports have not been localized to a specific area. Individuals have reported “sightings” of the sound from all over. Quite a few people have jumped on the HAARP bandwagon, however that label gets slapped on phenomena way to easily. What we do know is that this low bass rumble seems to continue for extended periods of time and no one know what it is or what is causing it, at least anyone who is talking. In some cases they were so loud they set off car alarms. In Germany noises coming from the sky were recorded on a video camera and uploaded to the web, with car alarms clearly heard going off in the background. The unsettling noises were heard recently from Europe to Canada, sounding like groans and powerful horns even booming. Sounds can last 20 minutes, and even longer.

The internet has been buzzing with theories about what the sounds could be, with suggestions such as Jesus returning and the world ending put forward.

A University of Saskatchewan physics professor told CTV that it’s electromagnetic noise emitted from auroras and radiation belts. While a geoscientist from the University of Oklahoma, has previously written about a phenomenon called The Hum a mysterious & untraceable sound that is heard in certain locations around the world by 2% to 10% of the population. Writing in the Journal of Scientific Exploration, he said that sources of The Hums could include telephone transmissions and aircraft operated by the U.S Navy for the purpose of submarine communications.

Accordingly, NASA stated that the Earth has ‘natural radio emissions’, and ‘If humans had radio antennas instead of ears, we would hear a remarkable symphony of strange noises coming from our own planet. Scientists call them tweeks, whistlers and sferics. They sound like background music from a flamboyant science fiction film, but this is not science fiction. Earth's natural radio emissions are real, although we're mostly unaware of them, they are around us all the time.

For instance lightning can produce eerie-sounding radio emissions, NASA added. Earthquakes can also produce sub-audible sounds, according to seismologist a spokes person from the Southern Methodist University in Dallas.