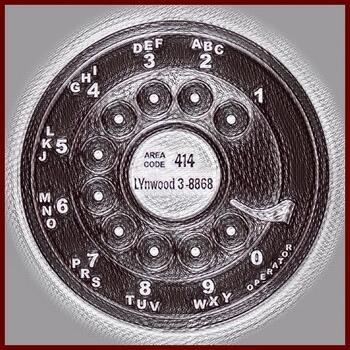 In 1962, when I was a young girl and still living at home, I experienced a very odd occurrence. We lived in a very old house. The house was wired for only 1 telephone, which hung on a wall in the kitchen.

This was the year my maternal grandfather had suffered several strokes, and required a lot of care. Since my grandmother never learned to drive, my mother would drive to their home and take my grandmother shopping, or help her take care of grandpa.

One Saturday morning, she went grocery shopping before she drove to their home. It was a rainy day, so I was left to take care of my 2 younger sisters and brother while she was gone. One sister and my brother were playing upstairs. The telephone was ringing, so I went to answer it. I said Hello, and was stunned to listen to a conversation that was taking place between my grandmother and my younger brother! The same brother who was upstairs, with no wires to hook a telephone to! I remember clearly the conversation, although not word for word. I clearly heard my brother say Hello.

I was so shocked, I hung up the telephone. I went upstairs and told my brother, who was only 9 years old at the time what had just happened...I am sure he thought I was crazy, but cannot remember what he said.

Then, I went back downstairs, and called my grandmother.

She said: I just called over there, and Larry was supposed to bring you to the phone, but he hung up on me.

I tried to tell her what I had just experienced, but she did not understand, but then, neither did I.

Often I wonder what would have happened had I not been so spooked and stayed on the line rather than hanging up, Would I have heard myself as well?

Keep in mind that this was in 1962, very rural area, extension phones were a rarity, and we couldn't dial 1 for long distance, everything was through the operator then. And party lines were the norm.