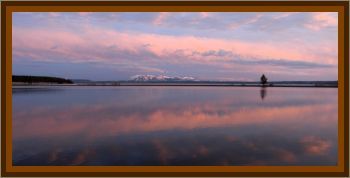 Strange sounds have been heard by visitors to Yellowstone National Park. Visitors have for years been claiming they have heard some kind of enigmatic music from the sky around the shoreline of Yellowstone lake. The sound was mostly been described as the ringing or telephone wires or as a swarm of bees. The sound is moving all the time and at first you can hear it somewhere in the distance as it grows rapidly until you have a feeling that something is directly over your head, and than the sounds vanishes as it goes into other direction. It quite possibly could be related to other phenomenon, such as "Sky Roars" , or even The "Hums".

The first time this phenomena was written about in 1890 was when a biology professor wrote about this phenomena, while he was on a U.S. Fish Commission project. Then an accomplished engineer with rigorous scientific discipline and who built roads and bridges in the park, as well as locks in Seattle’s Lake Washington Ship Canal, wrote about this mystic lake music in 1895. He was not given to idle speculation or unsubstantiated gossip about seemingly magical events. But, he was the one who wrote about it.

The sounds appear to take place at or near Yellowstone Lake or Shoshone Lake on a clear day when there is little or no wind and the waters are still, usually in the morning.

In 1930, the chief of the U.S. Weather Bureau, who based his ideas on observations others, also wrote about this strange sound on the lake. He noted that temperature inversions are not uncommon above Yellowstone Lake, where warmer air above the lake sits atop cooler air near the water’s surface. He claimed that such inversions may alter the normal way that the air conducts sound, he stated. It might produce sound mirages, in which distant noises of geysers, birds or steamboats might appear to come from near at hand.

Other theories written by a member of the Illinois State Natural History Survey, write about hearing the lake sounds while on the same expedition.

No scientific explanation of this really bewitching phenomenon has ever been published, although it has been s everal times referred to by travelers, who have ventured various crude guesses at its cause, varying from that commonest catch-all of the ignorant, electricity, to the whistling of the wings of ducks and the noise of Steamboat Geyser, It seems to belong to the class of aerial echoes, but even on that supposition cannot account for the origin of the sound.

This phenomena has no real explanation yet, with all the equipment we have now-days soon there will be some solution and answers to this mystery.

Yellowstone Lake is the largest body of water in Yellowstone National Park, The lake is 7,732' above sea level and covers 136 square miles with 110 miles of shoreline. While the average depth of the lake is 139' at its deepest spot is at least 390'. Yellowstone Lake is the largest freshwater lake above 7,000' in North America. In winter, ice nearly 3' thick covers much of the lake, except where shallow water covers hot springs. The lake freezes over by early December and can remain frozen until late May or early June.