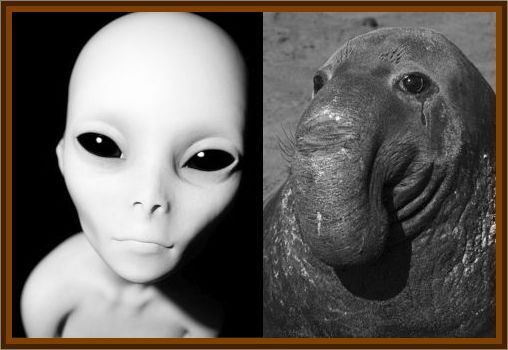 My husband and I put our two children to bed and sat outside for a while till we decided to go to bed, which was about 9:30 p.m.

At 12:00 midnight, I heard something so I sat up in bed and looked at the bedroom door, which was open. You could see our hallway and back door from our bed view. At the start of the bedroom door, and to about halfway down the hallway, there was a bluish white light. It was lighting up the hallway area, and in the light you could see a lot of particles floating around like as if someone threw white powder in the light beam. I looked at the clock; it was midnight exactly.

I looked at our baby in the crib, she was facing me, looked back at the hallway, and I saw a small, fat, brown, blobby thing, with somewhat of a child’s face, but just blobby. It looked really weird, then a head of something grey popped through the hallway wall, then it slowly stepped into the hallway from outside and they just stood there looking at me.

I stood up and just stood there just to see a taller bluish gray looking thing step through our wall into the hallway. This thing was huge and thin, and it was acting dainty like. It put its hand out towards me and for some reason I walked to it. I wasn’t scared at all, and I turned around and the two smaller ones were in front of me. The little gray one looked at me and when I looked in my room, the baby was still facing where I would be sleeping and my husband was still sleeping in the baby’s same direction as well, and my side of the bed was empty.

I looked at the clock, it was now 12:01 a.m. I was still holding the large being’s hand, fingertip/thumb holding.

We stepped through the wall and into their craft. The interior was pearlized white/cream like in color. When I touched the wall, there was like a slight glow around my hand and fingers. The seats were molded into the wall. There was some translucence to the walls of the craft. Wherever we went to, you could see the night turn into day, it went from dark to light really fast during that travel.

In the middle of the craft, I saw this weird bulb light thing. I walked to it. It was humming and you could feel vibrating air like around it. I went to put my right hand on it and the short, fat, brown being grabbed my wrist, his hand/thing felt like sand paper. The little gray in between the two put his hand up to where the brown one saw his hand and let go of my hand. Then the huge bluish gray thing pointed to the wall, so I looked at the wall and the craft was either stopped or it slowed down to a still.

It was lit outside. Then the tallest one looked down, so I looked down and the craft slowly dipped the bottom of the craft into water. We were in water. Then it plunged downward and I looked up as they did, and I saw a beautiful coral reef. You could see some fish swimming all around, and some plants. I remember a huge yellow fish with a blue stripe next to the wall of the craft. Then I looked at the things, the brown on my left, the gray in the middle, and the bluish gray on my right.

The little gray said (mentally): We do exist, his mouth did not move.

Then they looked out into the water, the craft pulled up slowly out of the water, the walls became slightly non-translucent again, and the craft took off. Then it went from light to dark. Before I knew it, the tall being came to my side to lead me back to my place (my hallway, we stood back in my hallway.

I looked up at this being and for some reason, it made me feel like as though it was a female. She must have been between 6'-7' tall, with huge wraparound pit shaped, gel like eyes. She had fat hairs lining the bottom of her eyes, and on the tight areas of the facial skin, there were bumps or pits, maybe like pores, or blemishes. I don’t know. No expressions, but it seemed very calm and dainty like. I believe the other two were male, they just acted differently from the tallest one.

Anyway, looking at her, I wasn’t scared, but I looked into my room and the clock now read 12:15 a.m. My husband and baby were sleeping in the opposite direction and my side of the bed was still empty. I crawled back into bed, looked at her as she went through the wall and was gone from my life.

From that day on, I have had a new perspective about life elsewhere and where they may be hiding out, and I also hear distorted windpipe chime noises, very rarely, but I don’t know what it is.