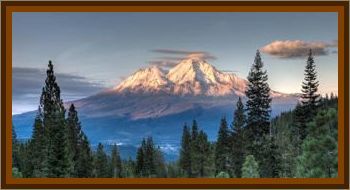 There are legends all over the world, found in every culture, which populate caves with spirits and supernatural guardians who dwell in a subterranean realm hidden just beneath surface of our own world. Westerns traditions, going as far back to the early Greeks and Romans, have always viewed caves as eerie entrances into the underworld.

California's Mount Shasta has been the subject of an unusually large number of myths and legends.

In particular, it is often said to hide a secret city beneath its peaks. In some stories, the city is no longer inhabited, while in others, it is inhabited by a technologically advanced society of human beings or mythical creatures.

According to local indigenous tribes, namely the Klamath people, Mount Shasta is inhabited by the spirit chief Skell, who descended from heaven to the mountain's summit. Skell fought with Spirit of the Below World, Llao, who resided at Mount Mazama by throwing hot rocks and lava, probably representing the volcanic eruptions at both mountains.

Mount Shasta has also been a focus for non Native American legends, centered on a hidden city called Telos, of advanced beings from the lost continent of Lemuria.

The legend grew from an offhand mention of Lemuria in the 1880s. In 1899, Frederick Spencer Oliver published A Dweller on Two Planets, which claimed that survivors from a sunken continent called Lemuria were living in, or on Mount Shasta. Oliver's Lemurians lived in a complex of tunnels beneath the mountain and occasionally were seen walking the surface dressed in white robes.

In 1931, Harvey Spencer Lewis, using the pseudonym Wisar Spenle Cerve, wrote a book about the hidden Lemurians of Mount Shasta that a bibliography on Mount Shasta described as responsible for the legend's widespread popularity. This belief has been incorporated into numerous occult religions, including 'I AM' Activity, The Summit Lighthouse, Church Universal and Triumphant, and Kryon.

According to Guy Ballard, while hiking on Mount Shasta, he encountered a man who introduced himself as Count of St. Germain, who is said to have started Ballard on the path to discovering the teachings that would become the 'I AM' Activity religious movement.

According to a legend, J.C. Brown was a British prospector who discovered a lost underground city beneath Mt. Shasta in 1904. Brown had been hired by the Lord Cowdray Mining Company of England to prospect for gold, and discovered a cave which sloped downward for 11 miles. In the cave, he found an underground village filled with gold, shields, and mummies, some being up to 10' tall. Thirty years later, he told his story to John C. Root, who proceeded to gather an exploration team in Stockton, CA. About 80 people joined the team, but on the day the team was to set out, Brown did not show up. Brown was not heard from again.

Entering the darkness of an underground realm, and emerging out again into the light, is both a literal and symbolic journey which has been duplicated in mythology and religious rites across all cultures.

The underworld also makes a spooky setting for legendary lost kingdoms, mythic treasures, and wells of mysterious powers. Nearly every culture has its own version of a mythic Inner Earth realm; its mysteries, its spirits or gods who must be acknowledged, and a bestiary of strange beings and creatures who dwell within, staring back up at us from a great depth.

For visitors who would like explore caves, tunnels, and ancient civilizations on foot, there are exciting alternatives for exploration. A day trip from the Mount Shasta region will bring you to a surreal desert environment known as Lava Beds National Monument, ancestral homelands of the Modoc people, which is open year-round.

Lava Beds is quite possibly one of the longest known human occupied regions of North America, with a history going back at least 11,000 years. It also contains one of the most extensive concentrations of underground caves and tunnels in the United States.