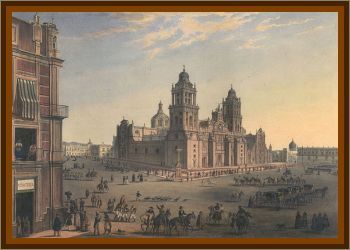 On the Plaza before the Palace in Mexico City , the guard was being changed. In the bright sunshine one soldier stood out from the rest, and small wonder, for he was dressed in a resplendent costume that was quite unlike the others. He carried a different type of musket, and it was plain that he was confused.

When taken in for questioning he told Mexican authorities:

My name is Gil Perez. As to standing sentry here, why I am merely doing as nearly as possible what I was ordered to do. I was ordered this morning to mount Guard at the doors of the Governor's palace in Manila. I know very well this is not the Governor's palace, and evidently I am not in Manila. Why or how that may be I do not know. But here I am and this a Palace of some kind so I am doing my duty as nearly as possible.

Then the soldier added:

Last night the Governor of the Philippines, His Excellency Don Gomez Perez Dasmarinas, had his head cracked with an axe in the Moluccas and is dead of the blow.

The soldier was told that he was in Mexico City, nearly 9000 miles from Manila, and he could not believe it.

Had he indeed been transported from Manila to Mexico City overnight, a physical impossibility in 1593.

For two months soldier Perez languished in jail in Mexico City, until a ship arrived from the Philippines. It brought news of that Governor Dasmarinas had indeed been murdered in the Molucca, and other passengers not only identified soldier Perez but recalled seeing him in Manila the day before he was arrested in Mexico City.

Unable to explain what had happened to the poor fellow, the authorities carefully recorded the facts and sent him back to Manila, then, as now, an unsolved enigma of space and time.