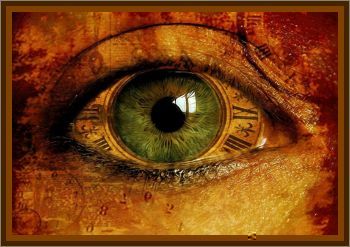 This event occurred to me at least twelve years ago, and I still don’t know what happened.

Driving home from a Friday night shift at the newspaper, my car’s cruise control set on 55 mph, I drove by a road sign I’ve driven by hundreds of times. It reads: Orrick: 5 Miles. Just as I went by, the Rolling Stones, Gimme Shelter came on the radio. Perfect.

I lived in Orrick, Missouri, at the time, and Gimme Shelter was not only my favorite Rolling Stones tune, it was also 4:37 long, which would last me all the way home. Then my drive fell out of reality.

A pull on the car engine snapped me out of the road hypnosis that had overtaken me. It took me a few seconds to realize that pull was the cruise control trying to keep the speed steady up a hill. The trouble was there were no hills between that road sign and my turnoff. Looking out the window didn’t help, a thick fog had enveloped the car and I could barely see the dotted line on the road. I slowed the car and drove up two more hills before I saw a light piercing through the fog.

Turning onto a gravel road toward the light, I found myself in the parking lot of a Jehovah’s Witness church and knew where I was,5 miles on the other side of my turnoff. As I sat in the parking lot, my car in park, trying to figure out how I missed the exit, I heard something I couldn’t believe. Gimme Shelter still played on the radio. It continued to play for another minute and a half.

After I calmed a bit, I put the car in gear, pulled back onto the highway and went home. The fog quickly dissipated. I’d driven ten miles in three minutes at 55 mph. That wasn’t possible. What happened to me?

Cases of missing time and distance are as common as they are confusing. The Internet is littered with tales of travelers entering a fog only to discover they’re suddenly 300 miles away from home, or they’ve gone nowhere, but it’s inexplicably hours later. Explanations range from time slips, to dimensional slips, to alien abduction. Whatever the case, Brandon White of Maryville, Missouri, has experienced missing time and distance; more than once. The first time I was about ten and I was walking out in the front yard, White said. It was just after lunch.

As White went toward a thick ring of pine trees that surrounded his family’s farmhouse, he saw something floating on the other side of the tree line. It was pale, sort of translucent, It was passing between our house and the neighbor’s house. I thought it was a blimp.

In his teens, his life got stranger. At 13 or 14 I stopped sleeping. I was deathly afraid of sleep, he said. I would fall to sleep, get into an REM sleep, and start screaming. I would wake up in strange places. In the yard, on the porch, upside down hanging from my bunk bed. White said he doesn’t remember when he’s been able to catch more than four hours of sleep a night. I had very vivid nightmares, he said. Those nightmares often included a bird. A big black crow. It would flap over my face, trying to take my breath.

Later in his teens when White worked at Long John Silver’s in a town 38 miles away, he experienced more missing time. I was riding my motorcycle. I remember that night very specifically. I worked a double shift, Before I left town, I filled up my tank. As he pulled onto a gravel road toward his parent’s house, he saw an orange ball hanging low in the sky. I stopped and thought, the moon’s a weird color, then I saw it was not the moon. The moon doesn’t block the landscape. As he got closer, he saw this orange ball was 30' to 40' in diameter, and hovered 5' or 6' off the ground.

He got off the motorcycle three hours simply disappeared. It’s the last thing I remember, it was 7:35 p.m. At 10:30 p.m. I pulled into Dad’s driveway and something zoomed over me and disappeared into a valley.

He stopped the bike and got off, leaving it running as he dashed to a fence to look for the light. It had gone. When he returned to his motorcycle, it started to sputter and the engine died. It was out of gasoline. I filled it up, drove 38 miles, and it died, White said.

White lost three hours of time and a tank of gasoline in what should have been a 40 minute motorcycle ride.

Years later, when White worked in nearby St. Joseph, Missouri, he stopped at a gas station around 1:00 a.m. to buy coffee and a candy bar to help keep him awake for the 45 minute drive home. He didn’t know something strange awaited him. I got on the highway, next thing I knew there was a thick fog, I didn’t know where I was. I was on this nameless dirt road, moving fast. The narrow road, sloped on each side and covered by a canopy of trees, seemed like a tunnel. He slowed and tried to figure out where he was. I found a field where I could turn around. The fog was so thick I had to open my door to see the side of the road. I had no idea where I was. I was really, really fuzzy and disorientated. I know I was upset about something, but I don’t know why.

Lights eventually bit through the fog and White pulled into the parking lot of a convenience store near the highway, but things were less than convenient. The store sat at the end of an exit that consisted of two difficult turns. White said he shouldn’t have made those turns. I would have had to, at 70 mph, gone through those 90° turns while I was unconscious. When I woke, I was pretty fuzzy headed. It was like I’d been drugged. Although White concedes for the skeptic it’s within the realm of possibility he could have fallen asleep at the wheel and gotten lost in the fogbank, he was miles from where he should have been, and would have had to be amazingly lucky. I don’t know how I could have made those turns, I lost distance and time. I haven't a clue on how I got there.