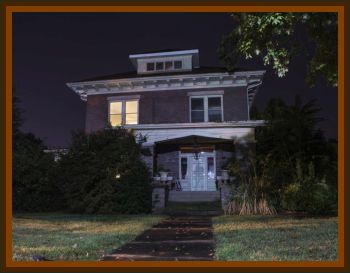 A friend of my brother bought a house in the Albright area about a year ago. My friend also moved into his brother’s house as care taker.

I visited him there in June of 2010 for a week. The first night I stayed in the house, I felt a little on the edge, as it felt like I was being watched by something. The second night I woke out of a sound sleep about 3:15 a.m. and felt as if I had a weight on my chest.

It was almost like a feeling of something heavy in the air in the house.

As I laid in bed trying to fall back to sleep,I could hear something that sounded like a man moaning outside my window.

It would start out as a light moan but than it would turn into a heavy breathing sound.

This happened all week until I left. I thought nothing of it, maybe just my wild imagination.

In late September of 2010 I returned back for a second visit, but this time my brother came with me.

Almost immediately I felt the same feeling of being watched and every morning a 3:15 a.m. I would wake up. Shortly after being awakened out of a sound sleep, I could hear the same moaning again.

This time though my brother heard the same thing as I did every night. I told my friend who lives in the house about what we were experiencing. He said:

It’s probably a buck grunting near the window outside the house.

I told him I know what a buck grunt sounded like and this was no deer grunt.

My brother was so scared that he grabbed a 30/30 that hangs on the wall and locked all the doors.

As the moaning turned into a heaving breathing sound coming from outside. The living room window began to shake. The sounds of foot steps could be heard walking around the sides of the house from outside.

This scared the crap out of us. I will never go back there again.