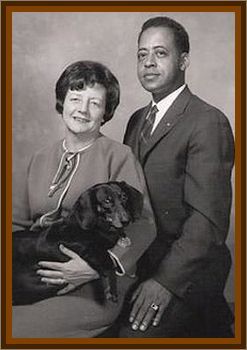 The abduction of Betty and Barney Hill, by a UFO in 1961 was the first Alien abduction case to be thoroughly investigated, and the first where employed hypnotic regression was used in the investigation of alien abductions.

The Hills were returning to New Hampshire from a holiday in Niagara Falls on that night in September 1961. Traffic was sparse as Barney drove through the White Mountains on Route 3. Close to midnight the couple noticed a strange light in the sky that started to move. He stopped the car and as Betty exercised their dog, Delsey, he observed the object through binoculars. He told Betty that it was probably an airplane. As they continued their journey the object seemed to remain with the car. They knew that it was definitely moving so they ruled out a star or a planet. The object changed direction and drew closer. Betty looked at the object through the binoculars and she saw that it was a disk shaped object with a band of light around its circumference. They stopped the car once again and Barney got out to get a better look of the object.

The object got so close to Barney that he was able to see several beings staring down at him through lighted windows. Suddenly he lost control and panicked, crying out: "They're going to capture us."

He raced back to the car and they sped off. The next thing the couple were aware of were several bleeps like the sound of a microwave oven.

The following day Barney noticed some unexplained blotches on the body of the car, soreness at the back of his neck and scuff marks on his shoes. Some time later the Hills realized they could not account for 2 hours and 35 miles of their journey. They began to suffer stress, but they had no idea why and Betty experienced horrible nightmares in which she was taken into a room and examined by strange beings. Within a year the Hills saw two doctors, finally being passed onto Dr. Benjamin Simon, a Boston Psychiatrist who specialized in hypnotic therapy. Dr. Simon regressed the Hills using hypnosis, but he did this to them separately, so that neither would know what the other said.

A terrifying story emerged that filled in the period of amnesia. Over several months an account was pieced together which told how their car was stopped by a group of strange-looking men with pear-shaped heads and large wrap around eyes. The beings forcibly carried the Hills into the lighted object, where they were taken into separate rooms. During their separation the couple underwent various tests by the aliens which included the taking of hair and skin samples.

While inside the craft Betty remembers seeing a star map. Later, under post hypnotic suggestion, she was able to reproduce the map. In 1974 Ohio school teacher and amateur astronomer Majorie Fish published the results of her studies of the map. After 5 years of studying the map Ms Fish found a match, the Zeta Reticuli system. But when noted astrophysicist Carl Sagan compared the Fish map using a more accurate computer program, he found there was little similarity.

Additional reading on this can be found HERE.