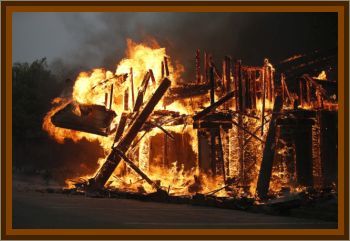 A strange and startling phenomenon took place near this city just at sunset last evening.

A large cloud was seen making its appearance, coming directly from the northwest, accompanied by considerable wind.

When near this place, a dark looking cloud, or substance, was seen to leave the cloud and make diagonally for the Earth.

So soon as it struck the ground, contrary to all expectation, it became highly luminous.

Making directly for a large barn that stood in the field, it passed through its center, setting it on fire.

Maintaining its course, gaining in velocity as far as the eye could reach, making a straight course for the woods, melting stone of considerable size, and burning up brush and under wood.

And finally fetching up against a perpendicular breast of solid anthracite coal of 60' in thickness, proving rather too much for its cometship, leaving nothing but a sulphurous mass behind.