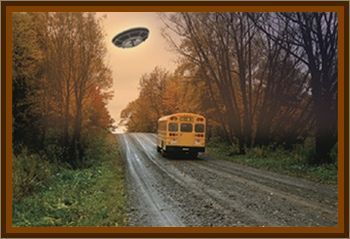 This account was obtained from a woman 40 years of age who at the time of these incidents was 10 years old. Her mother was a school bus driver and the young girl would accompany her on her mother's bus route. The mother passed away some years ago.

The woman's school bus route was between Lake Laberge & Whitehorse. During the bus trips a light in the distance would appear to follow the bus.

This light was visible at night as well as in daylight. All the students on the bus saw it.

This went on for weeks or possibly months and as a result the woman got nervous and asked to be switched to a new bus route. The woman was given the Whitehorse/Carcross route.

For the first 2 weeks there was no light to be seen.

The light was so bright that it could be seen in broad daylight. This went on for a few months and culminated in an event just before Christmas 1976, November or December.

It was about 4:45 p.m. and all the school children had been dropped off at Carcross.

On the return journey and in the vicinity of Emerald Lake the light appeared again and this time it was getting closer. It was just getting bigger. The daughter remarked.

It swooped down near Emerald Lake and stopped right in front of the bus.

Mother stopped the bus and we both got out and stared at it. It no longer appeared to be just a light but a bright and huge disk.

The disk took up about 45° to 60° of their view and was a charcoal/silvery color.

It had small lights along the bottom rim and a brighter middle section that appeared to be windows. Then they noticed undefinable shadowy shapes moving around in the window section of the craft.

My mother had enough, She backed me up and threw me in the bus, the daughter said.

The mother came back into the bus and was wide eyed. They both looked back out at the craft through the windshield and object rose vertically to about a 45° vertical angle then just disappeared.

They never saw the disk or light again.

We got home and told the rest of the family. Dad thought we were crazy.