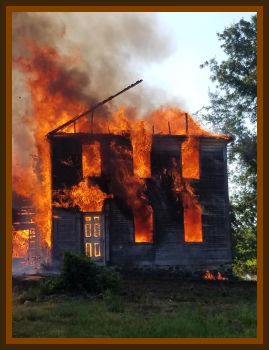 We were in the 7th grade and talked a lot after school on the phone. Well, we were talking one night and she told me that another house had burnt down in Bruceton. OK, usually that’s not a ghost thing, but there’s more.

Everyone had figured it out. Every time a house fell, it was a Thursday only a minute after the last one 2 months before had burnt to the ground, there were 2 months in between each incident, and it was in the same general area.

I being curious, did some research.

I waited till November on the third Thursday and at 5:11 p.m., sure enough the 4th house burned. Then I dove into more research. I found yet another article.

It said that when the witches died, burned at the stake, they put a curse on the 4 houses they lived in. They said a few hundred years later every 2 months one of their houses would turn into a pure ball of fire.

They went in order, the same day at the same time their house burned down when they died, hundreds of years later.

Now people claim they see ghostly figures of women around the new built houses, who knows what is coming next?