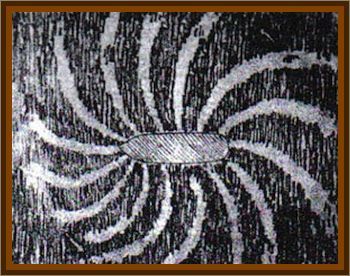 It was 6:30 p.m., and Commander J.R. Bodler's ship had just passed through the Strait of Hormuz into the Arabian Sea, bound for India.

It was a clear moonless night with a calm sea, when the 3rd Mate called Bodler to the bridge to see something unusual.

Off to the left of the ship, between them and the coast of Iran, there was a luminous band that was pulsating. It reminded Bodler of the lights of the Aurora Borealis, except the lights were not in the sky, examination with binoculars confirmed the light was actually below the line of the horizon, in the water, and it was drawing closer to the ship. It also appeared that the pulsations were starting at the center of the band and flowing to the extremities.

When the lights came to within a mile of the ship, it became apparent that the oddity was roughly circular in shape with a bright ill defined center, and streaks of light projecting out like spokes on a wheel.

What had been thought to be pulsations could now be seen to be caused by the whole object slowly rotating counter clockwise, so that the luminous beams appeared brighter as they each pointed at the vessel, like the beams from a lighthouse.

Even though Bodler's ship was steadily moing along at about 9 knots, the strange lights continued to approach and then pass under the ship, for a short time, Bodler's ship was about in the middle of the lights with the rotating spokes of the wheels visible on all sides, a moment that Bodler made a sketch of.

The spokes of the wheel were slightly curved, with the extreme ends trailing behind in the rotation. The light from the object was enough to light up the upper portions of the ship in the moonless night. With the rotation just below the vessel, Bodler was able to judge that each spoke in the wheel seemed to pass a set point at half second intervals.

As may well be imagined, the effect was weird and impressive in the extreme with the vessel seeming to occupy the center of a huge pinwheel whose spokes consisted of phosphorescent luminance revolving rapidly about the vessel as a hub.

The object eventually passed all the way under, coming out on the right side of the ship towards the back, it continued to travel away at the same speed it approached, until it soon appeared again as a pulsating band of light, but this time to the right and back of the ship's position.

That's when the second luminous object was spotted, in the distance on the right, and ahead of the ship. This band was slightly smaller than the first, and a little less brilliant.

This second wheel didn't pass under the ship, instead passing them slowly on the right side where the same pattern of spokes revolving around a center could be easily observed.

Finally, about 30 minutes after the second wheel had been seen, a third appeared. It was far less brilliant, and far smaller than the other 2, estimated to be no more than about 800' to 1000' in diameter, and, as Bodler put it:

Compared to the other two, was unimpressive.

In Bodler's report of the matter that was published in the January 1952 edition of the United States Naval Institute Proceedings magazine, he stated that there were no unusual deviations of their magnetic compasses, and that his impression was that the actual light was being caused by the natural phosphorescence of the water itself being stimulated by regular waves of energy, presumably from whatever constituted the center of the wheels.

Bodler felt the shape of the spokes in the wheels, their revolutions around the center, and the speed of their revolutions all excluded the visual phenomena being caused by schools of fish or dolphins, or any other similar cause.

Overall, Bodler believed he had witnessed a rare, but natural, phenomena, and was interested in hearing from others who may have encountered it, or from anyone of scientific bent who could provide an explanation.

Not surprisingly, once publications specializing in strange stories got wind of Bodler's report they had a very different idea about how natural the phenomena he saw was.

The earliest I've found Bodler's report referenced to so far is in an article called Pinwheels of Light in the Ocean, from the December 1958 issue of FATE magazine. Though it's implied that FATE published the bulk of Bodler's report in an earlier issue, I haven't tracked that down yet.

In any case, the December 1958 article briefly sums up a number of supposed accounts of the spiral lights in the sea similar to Bodler's account, concluding with a statement that the authors of the article, which is listed as by the Editors of Fate, by the way, believed the phenomena could be explained only as underwater equivalents to the UFO phenomena reported worldwide at the time.

The idea that UFOs could be under the waves of the sea had been suggested before, as several reports had been recorded of UFOs seen both diving into and flying out of the oceans.

Of course, there was and is no proof that Bodler's phenomena is related to UFO reports, the association relied heavily on the popularity of UFOs, the assumption that the aerial objects were some sort of vehicles, and the extension of what said vehicles could theoretically look like underwater, but mostly on that first item, the popularity of UFOs as a topic.

This idea of Bodler's report stuck, and was enhanced in later reports by trimming down the details given by Bodler to imply the first unknown object, once under his ship, then followed his ship for a distance, which gives the impression the object purposely changed directions to match his ship, and therefore was an object under intelligent control.

But this impression is simply untrue.

While it is still very unusual that the first object was on a course that made it intercept and pass below the ship as the ship was moving, Bodler's report does not imply in any way the object ever changed course or speed. So again, while a USO, Unidentified Submarine Object, aka Underwater UFO is a proposed theory, there is not yet any direct evidence that Bodler's unexplained phenomena is related to any other particular unexplained phenomena.

In addition, his willingness to report on it in an official U.S. Navy magazine primarily to other naval professionals highly argues against Bodler making up the report, as it could damage his reputation among his peers if he was caught lying.