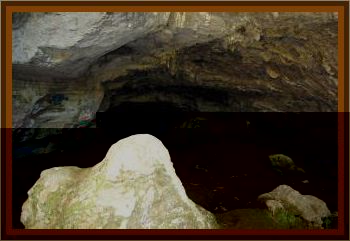 12 spelunkers, among them George D Wight, were exploring the cave when they spotted a light at the end of the tunnel.

As they approached it, Wight noticed a narrow crevice, just big enough for him to squeeze inside it.

Then he found artificial steps. He called to the others and they climbed through the opening. The tunnel expanded and they came into a large corridor, 20' x 20'.

The walls and the floors were smooth and the ceiling had a curved dome shape. Soon they encountered blue skinned but otherwise human like individuals.

The strangers communicated with the witnesses, telling them that they had instruments that could measure people’s emotions.

They learned that the tunnels went on for miles. They were led to underground cities populated by entities that included serpent like creatures and large hairy bipeds.

Soon, using an elevator like device they were taken to a glass like city. Soon after this incident, George apparently returned to the cave and was never seen again.