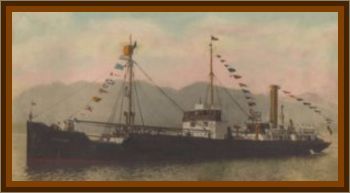 SS Baychimo was a steel hulled 1,322 ton cargo steamer built in 1914 in Sweden and owned by the Hudson's Bay Company, used to trade provisions for pelts in Inuit settlements along the Victoria Island coast of the Northwest Territories of Canada.

She became a notable ghost ship along the Alaska coast, being abandoned in 1931 and seen numerous times since then until her last sighting in 1969.

On October 1, 1931, the Baychimo was on a routine voyage, filled with recently acquired furs. An unexpected storm blew in, trapping the ship in a sea filled with ice. The closest city was Barrow, Alaska, the northern most city in the United States, too far to get to in the blowing snow and high winds. The captain and crew had to stay inside the trapped ship, where they hoped to wait out the storm.

By October 15th, the ship remained locked in the ice, so 15 of the crew were airlifted to safety, while the captain and 14 other crew members made a temporary camp on the ice near the stranded ship.

The terrible weather continued to pound down on the crew and the temporary camp went on for weeks. A fierce blizzard hit the area on November 24th, and the snow was so heavy that the campers could no longer see the Baychimo, which was still trapped in the ice. The following morning their worst fears came true. The ship had vanished, no doubt sunk by the preceding blizzard. The remaining crew made their way back to civilization.

Less than a week later, however, a hunter told the captain that the Baychimo could not have sunk, as he had just seen it floating in the icy waters almost 50 miles from the location where it had been abandoned. The captain was somewhat reluctant to battle the snows to try and find the ship, but he gathered his crew and indeed found the Baychimo in the location the hunter had described. The ship looked to have sustained significant damage, and so the captain feared it wouldn’t be seaworthy for much longer and would soon break apart and sink, so the crew gathered the cargo of furs and had everything, including the captain and the crew, airlifted out of the area.

And so, the captain thought, the story ended. But it didn’t.

After several months, she was spotted again but about 300 miles to the east.

In March of the following year, she was seen floating peacefully near the shore by Leslie Melvin, a man traveling to Nome with his dog sled team.

A few months after that, she was seen by a group of prospectors.

In August 1932, she was boarded by a 20 man Alaskan trading party off Wainwright, AK.

In March of 1933, some Eskimos, trapped by a storm, took shelter in the Baychimo for a week until the weather improved enough to journey back to their homes.

August 1933, the Hudson's Bay Company heard she was still afloat, but was too far a-sea to salvage.

July 1934, she was boarded by a group of explorers on a schooner.

September 1935, she was seen off Alaska's northwest coast.

In November 1939, she was boarded by Captain Hugh Polson, wishing to salvage her, but the creeping ice floes intervened and the captain had to abandon her. This is the last recorded boarding of Baychimo.

After 1939, she was seen floating alone and without crew numerous times, but had always eluded capture.

March 1962, she was seen drifting along the Beaufort Sea coast by a group of Inuit.

In 1969, the Baychimo was spotted at a distance, once again trapped in an ice pack. This was the last recorded sighting of the ship, and after a few years it was commonly believed that the ship did eventually give in to its deteriorating condition and sank to the bottom of the frigid seas.

In 2006, 75 years after the ship was first abandoned, the Alaskan government began work on a project to solve the mystery of the Ghost Ship of the Arctic, and locate Baychimo, whether still afloat or on the ocean floor. She has not been found yet.