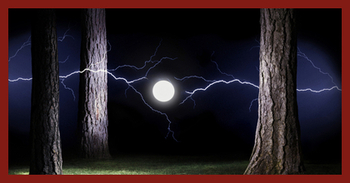 A friend and I were camping, and both saw, jumped and pointed, at a white orb that appeared near us.

It was maybe 4" to 6” in diameter. It glowed a soft white, and it looked like there was smoke inside of it. It was near a pure circle, and was silent.

It appear about 8’ off the ground, and floated up through the trees, almost looking like it was guided, missed tree limbs. It lasted about 10 seconds.

I’m not a superstitious person at all. I can’t explain it. I suspect Ball Lightning, but I really don’t know.

Ball lightning is one of the rarest and most dangerous forms of lightning. It’s not a UAP, it’s not a will o’ wisp.

It’s pure danger. I believe in phenomena, but do not underestimate ball lightning.