Silent UFO the Size of a Volkswagen 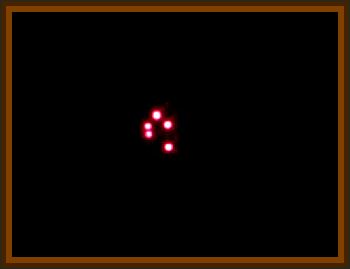 Lara David was sitting on her couch Thursday night. It was quiet. The TV was off, and her window was open with the blinds about halfway up when a bright light shone through.

We have those new LED street lights, so it matched up with that level of brightness, only there are no lights back there, said Lara.

She pulled up the blinds and looked toward the lights.

I didn’t hear anything, but saw this silent, low flying thing in the air, maybe 150' high, moving over Peabody Avenue. The thing was big, about the size of a Volkswagen, and it made this left looping turn right over Candia Road, she said.

Then it elevated higher in the sky and followed Candia road west.

Lara said she would have gotten in her car and followed it, but her husband was out and her child was asleep.

It had several odd bright lights all around it, like headlight type things and a little tiny red flashing light. It was very odd that it didn’t make any noise at all.

Definitely something was controlling it, whether it was a remote control or, I don’t think someone was in it. I don’t know.

There was no way I could have seen any better than I did, Lara related.

She immediately posted what she saw on Facebook, and on a website called Drone Patrol, in hope that someone else might have seen it, and was searching for someone else, like her, who observed the UFO.

Someone had to have seen it. It was steady moving and out of the ordinary, and too bright for someone else to not have seen it, Lara said.

She also noted that a few minutes before the lights appeared in her window she heard two planes overhead, which is not uncommon for Peabody Avenue residents. But they were unusually loud.

Maybe it was military tests or something, I don’t know.

But another person on Facebook echoed that she heard the same loud noise on Island Pond Road, David said.

The officer in charge at Manchester Police Department said he had just come on duty around 11:00 p.m., and hadn’t heard anything about a UFO since arriving 30 minutes earlier.

A quick check of the National UFO Reporting Center around 11:00 p.m. didn’t show any new reports, a September 17 post noted that site administrator would be out of town for several days.

There is an online form that you can fill out to report a sighting. A link to recent New Hampshire UFO sightings was updated on that site September 16.

A video was also posted recently on Facebook by Mike Pittaro of Concord, who captured three minutes of footage of some kind of orbs above the Target/Best Buy parking lot off Sheep Davis Road in Concord. Pittaro said his wife noted the orbs while photographing the sunset, and they quickly realized the orbs were only visible through the camera lens.

These objects were not visible to the naked eye. After asking multiple people to use their cellphones, they too caught the exact same UFOs, verifying what we were recording, added Pittaro.

On June 28 someone named Drew reported a sighting in the vicinity of Candia Road on the Mutual UFO Network, which he described as triangular with bright lights.

Lara said this was a first for her. I just want to say I don’t do drugs or drink or anything, I don’t know what I’d say it was, but I’ve never seen anything like it before. It was strange.