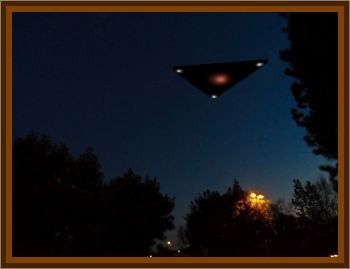 My husband and I were on vacation in Myrtle Beach last week. We stayed at the Ocean Park Resort. We were on the top floor, ocean view. I am a night, person, and really enjoyed sitting on the balcony facing the ocean and just listening to the surf.

That is what I was doing at the time of my sighting. I had just decided to go in for the night when I noticed three lights, two white, and one small red, in the southeastern sky. They did not appear to be moving and were totally soundless. Having brought several pair of binoculars with us for ocean viewing, I went and got a pair to look at this plane? What I saw, was not a plane.

It was very large and appeared to be triangular in shape. Using the binoculars, I was able to see that there were actually more lights then the three that I could see with the naked eye. This object was very large, at least 5 times longer then a passenger jet or cargo plane. I was able to see a cluster of many white lights on the far end. In the middle of these bright white lights, there was one small green light. I sat outside and watched this object for an hour and a half, it did not move, it just sat there in the sky, about 200' above the ocean.

The white lights on the back end changed frequently, some appeared to go off while others came on. The red light in the front and the green light in the rear always remained the same small, without blinking, while the white lights at times changed in size.

After an hour and a half, it started slowly moving. It moved without any sound and quiely floated toward me, until it was directly in front of our hotel, then it stopped. It stayed motionless and soundless for about 15 minutes. As I realized that it was actually coming in my direction, I got scared and went back inside. I was so scared that I quickly closed the drapes to hide from it.

I did continue watching it though. With the binoculars still in hand I watched it by peering though the sliding glass doors while pushing the drapes aside enough so I could see. After about 15 minutes, it turned directly toward the open ocean and slowly glided away. I was able to see the back view at this point very well. There were clusters of white lights on either end and directly in the middle was the small green light I had detected earlier.

The white lights often changed in size and in brightness. Not really blinking, but rather appeared to be imploding, five would go out, and ten would come on. I dared to venture outside on the balcony again and watched it as it just drifted out of sight, over the ocean. The entire viewing lasted one hour and 50 minutes. The next day I spoke to several of the hotel employees but no one had seen it. I also mentioned it to some other guests but they had been long in bed and sleeping at the time of my sighting.