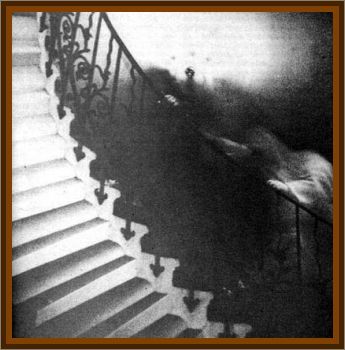 I was in my 20's when I started believing in ghosts, and believe me I am the type of person that doesn't believe unless I see it with my own eyes. It was a Saturday night, I was down at my best friends house, we were hanging out and talking, sitting on the couch in her living room. She lived in an apartment. The living room and kitchen were down stairs with the steps going up between. Up stairs was her bedroom, her sons bedroom and the bathroom. It was dark in the house except for the light on to the stairs and the TV on.

When I looked up I saw a man standing at the bottom of the stairs, he was wearing a black cape & hat, as in what Zorro wore. I couldn't see his face or his legs. He went up the stairs.

I thought I was just imagining things, and it really scared me. When my friend said what's wrong? I said nothing, she said yes sir tell me? I then again said nothing she said tell me, did you see something or someone? I then told her what I seen, She said oh my God! I asked What? She said, I see him all the time, he always goes up stairs in Codie's, Her sons Room. He never says anything to her but her son has told her that a man comes into his room and talks to him all the time. I had goose bumps and was scared the whole night and wouldn't go upstairs to the bathroom unless she went with me, and I made her sleep down stairs with me.

That is what made me a believer.