A Skeptic Reflects On UFO Encounter 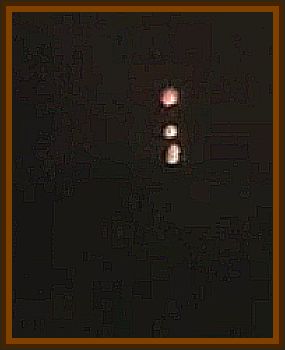 No one really takes UFO sightings too seriously. After all, have you ever seen an unidentified flying object?

Well, I was a bit of a skeptic myself, until I experienced my first close encounter of the third kind.

It started out innocently enough on the night of September 12.

My friend Mary Ann and I were driving south on the Saw Mill River Parkway, returning home from a successful shopping trip at Penney's in the Galleria.

We were discussing our purchases when we noticed a row of very bright lights ahead of us in the sky. It looked like a low flying plane coming straight at us. Right from the start, we had a hard time keeping our eyes off the lights.

As we neared the Ashford Avenue exit of the parkway, we noticed that the lights did not seem to be moving. Then, they suddenly changed their formation into a cross.

When we came off the parkway, the lights seemed to be only 20' or 30' above the rooftop of a nearby building. I quickly pulled the car over to the side of the road, and my friend stepped outside to get a better look.

We all were looking up at those lights, and they were mesmerizing. We could hear a small hum as they hovered above us. I tried to see above the lights themselves, but could see only darkness. The lights, while very bright, did not seem to be connected to anything.

My first thought was they were helicopters, because they just hung there. But they were much too quiet. Then I thought it was a blimp. That idea was soon shattered when two of the lights moved away from the others.

The lights had come up the parkway and stopped over this exit. Why? Did our attraction to them attract them to stay?

I remembered hearing about pilots who flew light aircraft, painted black, at night, and figured this was what I was seeing. A small part of me, however, suspected that maybe this was something more.

I also remember wishing I had paid a little more attention to those tabloid stories of sightings. Tales of secret Government testings, and aliens from outer space making contact, all popped into my mind. I wasn't sure what to look for at this sighting.

Time seemed as suspended as the lights were in the cool night air.

Those of us on the ground were trying to guess what it could be in the sky. There were many theories. It was so hard to figure out what the lights were. But, even if no one could pinpoint what we were witnessing, there was a very strange sense that something was going on. And really, can any of us believe we are the only intelligent beings in the whole wide universe?

Slowly, a little before 10:00 p.m., the lights began to move north. We continued our trip home.

We couldn't believe what we had just seem. Could it have been a UFO? As we drove away, the spell was broken and logic again prevailed.

This was the first time I could recall a sighting around here in such a densely populated area. More often than not it is in some secluded area like a farm or deserted field. Who knows. Maybe we interrupted some clandestine meeting when too many of us happened upon the lights and wouldn't leave. Or maybe the crafts were lost and trying to find that secluded field they were aiming for.

The next day I learned that there were also sightings on Central Avenue and on the parkway farther south in Yonkers. The 11:00 p.m. news on television had carried the story, as did a couple of local radio stations.

It is hard for me to believe what I saw, whatever it is that I saw. If there was any being up there studying us the other night, I hope we conveyed something positive as we stood there gaping.

My mind says Government testing, maybe; daredevil small craft pilots, probably, aliens from another planet, doubtful. But it's fun to wonder, and you really never do know for sure. A tiny seed of doubt has been planted.

And just like the Cowardly Lion who kept repeating:

I do believe in spook, just in case, I would like to go on record repeating, It's possible there are UFO's. In the future when it is discovered that there are, indeed, UFO's, someone may point back in history and say: See, she suspected the truth.