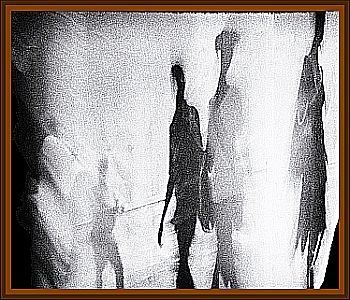 The apartment I moved into about 3 years ago had large amounts of activity.

I don't talk about shadow people often because people assume you're either joking or crazy. But I've seen some recent posts and articles, and as a believer in synchronicity, here I am.

My downstairs neighbor that lived directly below my apartment had severe mental health issues, and activity seemed to peak during his worst episodes. I had never experienced shadow people before, and while not exactly a skeptic because I have always had an interest in the paranormal, I was unsure of my stance on them. Well not long after settling into the apartment, I begin seeing silhouettes in my peripheral and darting about. I chalk it up to being in a new place and my imagination until my girlfriend, who does not believe in paranormal, mentions seeing the shadows. This freaks me out, and I open up to her about seeing them too.

Over the next few months, we both start to come to terms with their presence, and our initial shock and fear begins to fade. We even jokingly referred to them as our guests. I even start to notice different mannerisms and characteristics of them. I know of at least 4 separate entities that would pay us visits.

Taller than the door frame and very broad. Think the stereotypical lumberjack and that's him. He would appear almost exclusively in the hallway leading to the bedrooms and bathroom.

Very quick, very high energy, very nervous. Average height, skinny. It's favorite room was the living room, but once you caught a glimpse of it, it was done. Would quickly disappear and not be seen again for days, sometimes weeks. I would joke with my girlfriend that it's more scared of us than we are of it.

The size of a child and very curious. Would mostly be seen in the bathroom, specifically in between the toilet and bathtub, kind of hiding behind the shower curtain. Occasionally it would come into our bedroom, usually if I was home alone. One night in particular, my girlfriend was at her mother's for the night, and I was laying in bed reading, trying to get sleepy.

Eventually, out of the corner of my eye, I noticed Little One slowly creeping up beside my bed. This startled me and I jumped, it disappeared.

I shake it off, go back to reading, and moments later, it's back, doing the same thing. Instead of freaking out like last time, I try to remain calm, and slowly turn my head. It quickly ducks down behind the foot of the bed and out of view. This happens a few more times, and I begin to get the sense that we're playing a game. I finally feel like I can sleep and I say outloud:

I finish reading, and no longer notice it in my bedroom anymore.

You already know who the last one is. Hat Man was the least common of our guests. We only ever saw him a handful of times, always standing in the doorway of our bedroom. I didn't know this was a well known entity, famous enough to have his own pronoun, until months after his first visit.

Unlike others that have seen him, I never felt any sinister vibes from him. Just creeped out because unlike the others, he was clearly wearing a hat, and was standing in the doorway, apparently watching us.

As I said at the beginning, activity spiked when our neighbor was at his worst.

About a year ago, he had to be moved to a nursing home, and activity seemingly left with him. Every now and again, I'll catch glimpse of movement out of the corner of my eye, or I'll see a shadow in the middle of the night that is darker than the darkness of the room, but it'll vanish a split second later. I like to think it's our old guests checking on us.

I truly believe that they were drawn here, conjured, summoned, whatever you want to call it, by the bad energy that surrounded my neighbor. But I don't feel that they themselves were bad, or that they had bad intentions.

That is all I have to share, and while I got used to their presence, I can't say that I will miss them if they never return. It's a peace of mind that I didn't have for almost 2 years.