I Had An Unexpected Visit 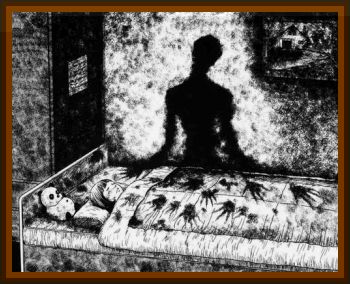 I had an unexpected visit from someone...or...something.

Anyways, I was suspended from school for a couple days for yelling at the teacher I think. So naturally I got bored of not doing anything, and my dad was in his gaming area and I was playing with Lego's and Barbie's, I was in 2nd grade so don't judge, and I saw a shadow figure.

I didn't know what these were at the time, me being in 2nd grade and all. It was in the shape of a young woman who look a lot like my teacher at the time.

I was confused because I had never seen anything like this before. It walked to the bathroom so me being in 2nd grade I followed it. It disappeared when I got to the bathroom.

I thought nothing of it and went back to my room, but not before telling my dad. He told me it was my imagination and told me to leave it alone. But because or house had been broken in before he checked it out and said that it must've been my own shadow.

I left it alone and forgot about it.

Until a couple weeks later, I saw the same shadow person in my dream and when I woke up I had scratches on my face.

I told my dad about it and he saw the scratches on my face and put some antibiotic ointment on it and sent me to school.

I forgot about it again. Until years later, 3 years ago, I was in 7th grade, and my friend told me about how he saw a shadow person in his room the night before, with the same exact description.

My heart fell to my stomach as I told him that I saw it too, years ago. He looked at me with a pale face and said:

And then asked if it scratched me in the face. My heart fell to my stomach as he said:

It showed up to my room last night in my closet and stared at me for almost an hour an then vanished.

How did you know it scratched me in the face?

That's what they do, they show up and scratch you face.

I got scared and thought he was messing with me until I went to his house and saw it in his closet. It looked at me and him and then left.

Its been almost 4 years and we still haven't talked about it. He moved to another state but we still keep in contact. We're both going into 10th grade this year. It still scares me to this day.