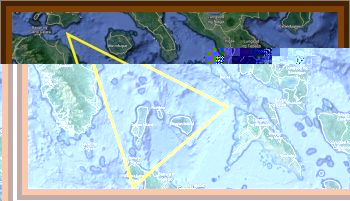 The Romblon Triangle is a region in the central seas of the Philippines which lies near a province of Romblon. The boundaries of the triangle cover the entire area of Northern Romblon province, and its endpoint lies on Concepcion Municipality, in between Dos Hermanas Islands, Isabel and Carlota Islands, and Sibuyan Island.

On clear days and good weather, people call it as the Edsa of Philippine Navigation. But in the past and during bad weather it is called as the graveyard of the sunken ship.

The Don Juan, with at least 1,000 passengers collided with an oil tanker in 1980. Dona Paz with 4,000 on board also sank in 1987 with the same reason as the Don Juan. While in 2008, the Princess of the stars had sunk and capsized at the highest of Typhoon Frank with more than 1,000 passengers. It is also said that during the World War II, four battleships of Japan had sunk at the battle of Sibuyan Sea.

There is also an uproar of legends in the province about the gold owned by Lolo Amang, which glistens with gold, but disappears when the sea turns pitch black. The golden ship is said to be seen in many maritime incidents. Some people said that the ghost ship had been in the vicinity before the Don Juan collided with an oil tanker.

The legend might sound realistic, but it doesn't give a realistic explanation about the Romblon pyramid. But the Philippine Coast Guard said that disasters are due to high tides and other natural phenomena that affect the navigational and topographic features of the vessel.