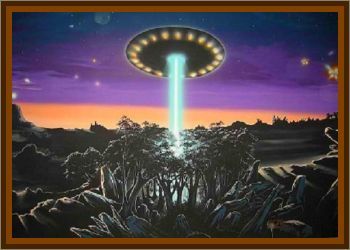 There are 2 versions to this story, The same...but different.

Unable to identify flying objects seen in the evening sky over Las Piñas last Sept. 3, scientists from the United Nations want more data to explain the sighting. Last Friday night, the 7 member team led by Dr. Jean Chu viewed a 40-minute video of the phenomenon taken by Antonio Israel. During the screening, they fired a barrage of questions at Israel like how the dancing balls of light moved, what the conditions were at the time, and if he or his neighbors were feeling anything unusual when they saw the lights.

It would be interesting if we gather more data, talk to the neighbors who witnessed it, and find out if residents of other neighboring places in Metro Manila were able to see them, Chu said. The scientists inspected Israels home, Israel said, particularly the spot where he stood when he filmed the lights, suspected to be extraterrestrial spaceships, by those who saw them. They also inspected Israels neighborhood and nearby streets to see if the lights were caused by anything on the ground. They asked him anything unusual happened like malfunctioning electrical or mechanical gadgets or appliances at the time of the UFO sighting.

They were at a loss for words after viewing the video. Maybe one can’t really say when given just that footage to look at, one scientist told The STAR when asked if the lights were indeed alien spacecraft. Chu & her team, in town to study the Philippines disaster preparedness, said photos of the UFOs which appeared in The STAR on Sept. 20 piqued their interest. She told him that their field of study also delved into the connection between strange environmental events and disasters taking place where the phenomena occurred. Experts from the Philippine weather bureau were likewise stumped by the video footage. Israel said he and his neighbors who saw the spectacle were convinced that the lights were alien spacecraft.

Authorities couldn’t agree yesterday on the nature of the saucer-shaped flying objects caught on video by a Las Piñas resident. Air traffic controllers at the Ninoy Aquino International Airport in Pasay City said yesterday they have previously seen the small balls of fire which Las Piñas resident Antonio Israel said he was able to capture on video. But officials of the Manila Observatory at the Ateneo de Manila University in Que-zon City said their telescope was not able to monitor what are believed to be unidentified flying objects, UFOs, on Sept. 3, the night an entire neighborhood in Las Piñas was all astir because of the phenomenon.

Las Piñas resident Antonio Israel fears authorities may dismiss them as mere planetary illusions the disk like objects he had recorded on 40 minutes of video tape, which he said he and his neighbors had seen with their own eyes.

An air traffic controller, who requested anonymity, told The STAR yesterday that they see every now and then, those red balls of fire, but that they were merely satellites or heavenly bodies. Yes, we have seen them before, he said. He was on duty the night Israel said he saw the small balls of fire dancing frenetically in the evening sky, but added that they had not bothered to log the sightings of the objects, nor talked about them because they were not considered significant. However, the air traffic controller said he was not competent to declare whether or not the small balls of fire that Israel had captured on film were UFOs. He suggested that Israels video footage be brought to an astronomer for analysis, particularly to the University of the Philippines Observatory in Diliman, Quezon City.

Assistant Secretary Jacinto Ortega Jr., Air Transportation Office, ATO, director, told The STAR yesterday, he will ask the air traffic controllers if they have seen the glowing, dancing, flying objects, and whether they have submitted a report to his office. I have not received a report on the so called flying objects from our air controllers, the traffic controllers, who were on duty on the night of Sept. 3, did not find anything significant with the red balls of light which at times turned white and yellow, moved around and danced in the sky. There are too many things that can be seen in the evening sky.

On the other hand, Fr. Victor Badillo, member of the Manila Observatorys upper atmospheric observation office, told The STAR yesterday their telescope was designed to monitor planetary bodies in outer space, the Manila Observatory could not have detected any UFO which might have appeared in the sky over Las Piñas on Sept. 3 as these would have been within the earths atmosphere, And he doubts if the ATO has the equipment or the technical capability to detect or record the appearances of any UFO as in the case of the incident in Las Piñas. Actually, all over the world, such instances of mysterious objects appearing in the sky and being recorded on camera has already been reported before. The problem is how to explain it. The UFO investigating team of the Philippine Atmospheric, Geophysical, and Astronomical Services Administration, led by Elmor Escosa, is the most authoritative body which could determine the authenticity of Israels footage, And that Escosa has been studying for a long time all reported UFO sightings in the country and abroad, and that he is the most knowledgeable in the field.

Escosa told The STAR yesterday his team was not able to make a thorough investigation of Israels video tape because the businessman does not want to entrust the tape to them. In an interview with The STAR, Israel said he was keeping the film for the time being to ensure its security and exclusivity, indicating he had not yet shown the public several minutes of the video tape, which may indisputably prove the balls of fire were actually alien space ships. I’m waiting for the right time to show them.