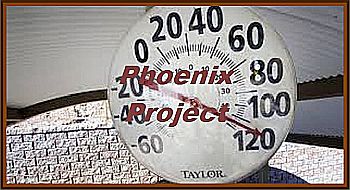 The Phoenix Project actually gets its start in the late 1940's. It was an attempt to control the weather using information and technologies derived from the work of Dr. Wilhelm Reich, an Austrian scientist. Reich is said to have been a brilliant man, credited with discovering the highly controversial orgone energy. Orgone energy is also known as life or orgasmic energy and is very different from more ordinary electromagnetic energy. Reich supposedly proved the existence of orgone energy in various laboratory experiments, and wrote up his findings in several scientific journals. He claimed that orgone energy could cure cancer, a finding that didn't find wide acceptance with his colleagues. Reich also stated that orgone energy has related to cosmic energy and with the Newtonian concept of the ether. Needless to say, his theories where widely criticized by his fellow scientists.

The ether is a Victorian concept that refers to a hypothetical substance that suffused all of space. It served as a medium for light and other forms of radiant energy. This ether was a popular concept and was used by more than one science fiction writer as a way to explain space travel. For example, E. E. 'Doc' Smith sprinkles references to the ether all through his Lensmen novels.

With further research, Reich found that orgone energy was responsible for storms and bad weather. Dead orgone, or DOR was the term used to describe the dead energy found within violent thunderstorms and hurricanes. This dead energy was also found within people as well. Active people had plenty of orgone energy, while those who were depressed or sullen had an excess of DOR energy.

After extensive research, Reich finally developed a device that would break up concentrations of DOR energy. When set up with a weather balloon, this device would dissipate or deflect thunderstorms. Armed with Reich's storm-buster, the US Government created a device called a radiosonde. This device consisted of several sensors and a transmitter that could broadcast across several bands to either build up orgone energy or to disrupt DOR energy. With it the government could control the weather.

It should be pointed out that any device capable of transmitting both orgone and DOR energy could be used to affect people as well. It is possible that the Phoenix Project was also looking into methods of population control. Supposedly, the Soviet Union had conducted extensive experiments on select populations by broadcasting orgone or DOR energy into the area to try and alter the emotion content of the population.

In the early 1950's the Phoenix project was merged with the remnants of Project Rainbow. The revised Phoenix Project was to delve further into the study of electromagnetic effects and their use in achieving stealth technology. The problem the Phoenix Project faced was how to keep this new technology from having such an adverse affect on humans involved in the experiments.

The director of this new phase of the Project was Dr. John von Neumann, brought back to oversee operations. He concentrated on the metaphysical side of the experiments in an attempt to determine what had gone wrong. He and his team worked for about ten years on the problem, studying why humans had such a problem with intense electromagnetic fields, especially ones that were capable of producing the sort of effects seen in the Philadelphia Experiment. What they found was that human beings are born with a time reference point. This time reference point is linked to the electromagnetic fields native to the Earth and help orient man to the nature of the universe and how it operates. It is a separate entity, distinct from the physical body. When the generators were started on the Eldridge, the link to this point was severed, causing the crew of the Eldridge massive physical and mental trauma.

It was determined that the devices used in the original Philadelphia Experiment had created an artificial reality around the Eldridge. Thus, the ship had been removed from the normal plane of existence, rendering it invisible. The problem was that the new reality had no connection to our world, thus disorientating anyone within the field. In order to overcome this problem, a time reference point, linking any potential inhabitant of the electromagnetic bottles created by the Project Rainbow technology back to their point of origin, had to be developed.

This problem was solved by giving the bottle a phony background, a false Earth, to link to that would reduce any form of transdimensional disorder. A computer was used to recreate the time reference points of specific people and to generate a false electromagnetic background that would give the physical body something to lock on to. If this system failed, the physical and the mental body would separate, resulting in insanity.

This phase of the project was completed in 1967. A report was then sent to Congress stating that the human mind could be altered by the use of electromagnetics. With development, one could create devices that would change the way people think. Congress, fearing the results of such experimentation into mass mind control, refused any further funding for the project and in 1969 ordered the Phoenix Project to disband.