Multiple Objects Seen Over The Philippines 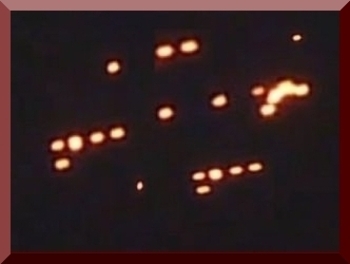 The first object they saw headed east to where the moon sits around that time. Another two emerged and three more objects appeared from the western horizon.

These unusual objects could not be mere airplanes because two of them were already pretty close to the moon, exclaimed 11 year old Nica Canarias as she apparently had the impression that the objects were heading to the moon. Nica, the eldest in the Canarias siblings and one of the early witnesses, immediately called her 9 year old friend Adrian Israel. Adrian, whom the Canarias knew as a UFO experiencer is the son of Antonio, Tony, Israel, who took video footage of UFOs above the Las Piñas skies back on September 3, 2000.

Adrian confirmed that these objects were similar to those he saw four years ago. So he rushed back to his house and prompted his older brothers, who then told their father Tony. Tony rushed outside with his video camera. He was joined by his neighbors who watched while the objects moved erratically, jerking, floating and jumping in various directions.

From 7:30 p.m. to 8:15 p.m., Israel was shooting videos of at least five UFOs, each emerging from the horizon at time intervals of approximately eight minutes.

Israel told ABS-CBN that he was now more composed in aiming his video camera at the subjects compared to his first encounter.

I learned a big lesson from the previous investigations made by the PAGASA UFO Investigating Team, Philippine Atmospheric, Geophysical and Astronomical Services Administration, and from criticisms telling that in my first UFO encounter, the video lacked panning that’s why there was no referential point to approximate size and distance. So from this chance, I think I panned well enough and a probable estimation of the objects' altitude and size could be established.