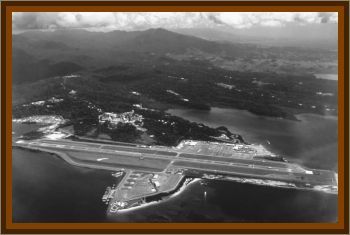 I was in the U.S. Navy working at U.S. Naval Air Station Cubi Point Tower, it was after sunset and dark a clear night. I noticed a half moon shaped object to the southwest over the South China Sea. It was the same color as the lighter shade of our moon but not textured, just a flat shade. The bottom was straight and the top was round like a half shaped moon.

I asked the other navy controller I was working with:

He responded the moon is behind us.

We both looked at the moon and then looked back at the object over the South China Sea. We stepped out onto the tower catwalk to make sure it wasn’t a reflection from the tower windows and the light inside the tower cab.

I was 20 years old when this happened, I’m 65 now and remember it like it was yesterday.