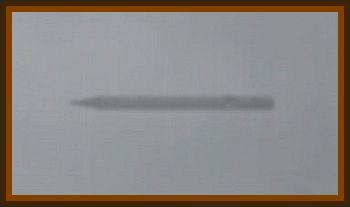 On second rise object climbed at 45º angle to the left and into the clouds then emerged out of the clouds diving straight down to 300' above ridge. Object circled slowly as it rose a third time at a 20º angle into the clouds again finally disappearing. Always kept broadside to witness. No sound or smoke. Report mistakenly treated as ground intrusion, thus GCI radar not alerted until 10:02 a.m., and F-47 fighters dispatched found nothing.

Page 32 under the Unusual Flying Objects: A civilian guard, AESS on duty at Oak Ridge, Tennessee reported sighting an airborne object on December 7, 1951 at 8:15 a.m. EST. Traveling at a constant speed, equivalent to conventional aircraft, the object was described as square, approximately 20' wide, grey/white in color, with no markings. The observer, age 40, is described by his employer as honest and conscientious, and is held in high respect by his employer. Two F-47's were unsuccessful in an attempt at interception.