Many States Report Strange Craft In The Sky 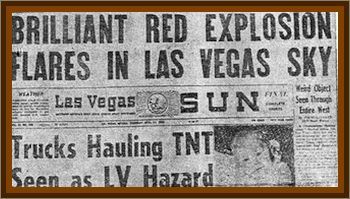 There is evidence that a UFO crashed in the desert surrounding Las Vegas, Nevada on August 18, 1962, specifically, near Nellis AFB. Thought to be nothing more than rumor, reports and statements from eyewitnesses slowly started to emerge. Eventually, researchers started digging for more information. The object was first spotted over Oneida, New York and was heading in a westerly direction. There were also reports of the object in Kansas, Colorado and Eureka, Utah. The object was the seen in the town of Reno, Nevada and was seen to 'turn' in a southern direction where it disappeared over the Nellis Air Force Base. The object was also tracked at several radar sights. The object was reported by over a thousand people, most of whom, assumed that the object was a meteorite.

Various newspapers covered the story the following morning although most of them concluded also that it must of been just a very spectacular meteorite. However, Air Defense Command, after watching the object for several hours scrambled several fighters. This was a highly unusual act since meteorites never cause such a response. It was claimed the object came down near Eureka, and at the same time the town experienced a total blackout. However, the object was then seen to take off again, and as it did the power came back.

The object was also seen at various times by several commercial airline pilots who reported that the object was below them, again unusual for a meteorite. The official Air Force explanation was that the object witnessed was a meteor. However, this does not explain why flights were scrambled, or why the object changed course and later appeared to land and then take off again. Like many of the reports of UFO crashes, the Las Vegas case was overlooked by most of the UFO research community. Frank Edwards, who mentioned the Roswell case in a single paragraph in his 1966 book UFOs and Flying Saucers: Serious Business wrote more about the crash near Las Vegas in his 1964 book Strange World. According too Edwards, an object sighted over Oneida, New York, continued westward. There were reports from Kansas and Colorado, and indications of something near the ground outside of Eureka, Utah. Something bright enough to later light up the streets of Reno, Nevada, like the noonday sun, and then turn toward Las Vegas, far to the south and hack to the east. It flared brightly and disappeared from the Nellis Air Force Base radar scopes at 10,000'. This was an object seen by thousands as it crossed the country.