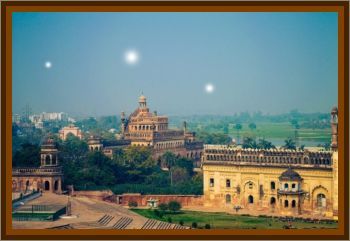 It comes in the night, a flying sphere emitting red and blue lights that attacks villagers in this poor region, extensively burning those victims it does not kill.

At least that's what panic stricken villagers say. At least seven people have died of unexplained injuries in the past week. Many others have suffered scratches and surface wounds, which they say were inflicted while they slept. In the village of Darra, 53 year old Kalawati said she was attacked last week and displayed blisters on her blackened forearms. She Said: I can't sleep because of pain.

Doctors dismiss the stories as mass hysteria, But the police have another explanation: bugs.

It is a 3½" long winged insect, that leaves rashes and superficial wounds, Kavindra P. Singh, a superintendent of police, told the Press Trust of India news agency. Police drew this conclusion after residents of one village found insects they had never seen before.

Villagers are unconvinced. In the most affected area, the Mirzapur district, 440 miles southeast of New Delhi, people have stopped sleeping outdoors despite the sweltering heat and frequent power outages. They also have formed protection squads that patrol Shanwa, beating drums and shouting slogans such as: Everyone alert. Attackers beware.

Some accuse district officials of inaction and failing to capture the aliens. One person died Thursday in nearby Sitapur when police fired shots to disperse a 10,000 strong crowd demanding that authorities capture the mysterious attackers.

People just block the roads and attack the police for inaction each time there's a death or injury, said Amrit Abhijat, Mirzapur's district magistrate, who claims he has captured the UFO on film.