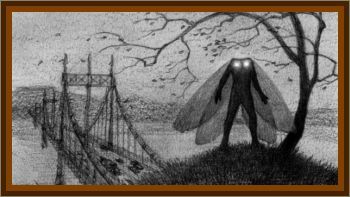 Some say sightings of the Mothman foretell impending disaster. It is a supernatural omen, a harbinger of doom that appears before some catastrophe. Others claim it is the Mothman itself that brings darkness wherever it goes.

This winged humanoid was first reported by citizens of West Virginia during the year prior to the horrible collapse of the Silver Bridge in Point Pleasant.

Is the Mothman a messenger that came to warn the people of Point Pleasant?

Or, is it something else altogether, a being incapable of malice towards humans. Some people think the Mothman is simply a rare animal, such as an owl or other large bird. Perhaps it is a new creature so far unknown to science.

This clears the beast from any involvement in the Silver Bridge collapse, but it also raises some other interesting questions. Might there be some new animal out there, as large as a human and able to fly?

Still other's insist the Mothman is a demonic entity that leaves destruction and sorrow in its wake.

In over 40 years since the beast first appeared nobody has been able to get to the bottom of the Mothman mystery. Of course that means there’s little hope of achieving that within the scope this article, but what we can do is look at the facts, and come up with some theories.

Let’s explore this Mothman and the stories surrounding it, and try to determine if it is friend, foe, or just some unknown creature trying to get by in our crazy world.

The first documented alleged Mothman sighting occurred in 1966 when two gravediggers working near Clendine, WV, reported a large, winger humanoid that flew from a nearby tree and glided over their heads. But it would be three days later, on November 15th, that this beasty would begin to make a name for itself.

While out driving near an abandoned World War II TNT plant, two couples claimed a massive humanoid with a 10-foot wingspan and large, glowing eyes appeared in the sky, and the chased their car down the road.

That same evening a man living ninety miles away was roused out of his home by a strange sound. In his yard he spotted two glowing eyes that belonged to no animal he was familiar with. His hunting dog took off after the creature, and the terrified man bolted back indoors. The dog was never seen again.

Local papers dubbed the creature Mothman. Soon lights in the sky were reported over the TNT plant, and theories began to surface that a terrifying beast may have chosen to take up the woods, tunnels and abandoned buildings of the old plant as its home.

Odd reports continued for months, claiming to spot the Mothman, UFOs, and other odd phenomenon in the Point Pleasant area. But it all came to a sudden halt just over one year later.

The Silver Bridge was built in 1928 and connected Point Pleasant, West Virginia, and Gallipolis, Ohio. On December 15, 1967, it crumbled into the Ohio River during rush hour, killing 46 people without warning. It was one of the worst catastrophes in American history.

Investigators blamed the poor design of the bridge structure, and the excessive loads it was never meant to carry, for the collapse. It was determined that the entire bridge fell apart because of the failure of one single link.

Mothman sightings came to stop after the Silver Bridge collapse, leading to the theory that the Mothman and the bridge disaster were directly related. Some claimed to have spotted the Mothman near the bridge just before it fell into the river.

This theory was heightened by the 1975 book The Mothman Prophecies by John Keel. Keel researched the Mothman phenomenon during the months prior to the disaster, and believed supernatural forces were at work in the area of Point Pleasant. The book would later spawn the film of the same name in 2002.

If the Mothman and the Silver Bridge collapse are connected, what could that mean? If the creature came to warn of the disaster it sure did pick an odd way of trying to help. Or maybe the coming tragedy lured the creature to Point Pleasant. Was the Mothman a kind of Angel of Death, arriving in anticipation of coming doom?

When it comes to the Mothman, all we know for sure is citizens of West Virginia were spotting something strange from November of 1966 until the Silver Bridge disaster in 1967. They called it a man-like creature, with glowing eyes and huge wings, and it had the ability to fly. Are there any real world animals that might fit this description?

At the time of the sightings, one wildlife expert suggested that the Mothman may actually be a Sandhill Crane that had strayed from its ordinary habitat.

These birds can stand four feet tall, and have wingspans in the range of seven foot. Witnesses dismissed this theory, saying what they saw was surely no crane. It’s interesting to note that the Sandhill Crane is also blamed as the culprit in Jersey Devil sightings.

Owls are smaller birds, but would account for the glowing eyes typical of Mothman sightings. The Barred Owl and Great Horned Owl are two possible suspects. Even if the original sightings were not of owls, it stands to reason that once people knew of the Mothman they may mistake a harmless owl for something more ominous.

Of course there is the possibility that the Mothman may be some creature not yet identified by modern science, perhaps a rare species of bird or bat.

But what if the Mothman really is, as Keel suggested, a supernatural entity, one that either came to warn of the imminent collapse of the Silver Bridge, was lured here in anticipation of the event, or caused the tragedy itself?

In the decades that have passed people have claimed to witness this creature before all kinds of major disasters. Is the Mothman an angel, warning mankind of dark times to come? Is it a demon that leaves destruction in its wake? Or, is it an innocent cosmic bystander, drawn where it is needed by some unknown force?