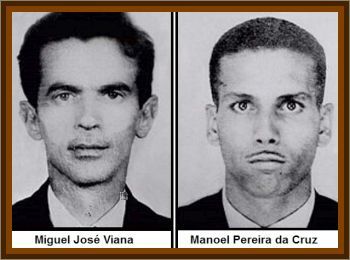 Two deaths occurred in Rio de Janeiro, Brazil under strange and unique circumstances that are still not understood. The young men, Miguel Jose Viana and Manoel Pereira da Cruz, were electronics technicians from a small village outside Rio who were rarely seen without one another and shared an unabiding interest in UFOs. They were last seen alive together on August 17 in a small bar close to Vintem Hill, a known UFO sightings hotspot. They were on their way to buy a car and had the money on them. Stopping in the bar to buy a bottle of water, they were to return the bottle later on that day but never returned.

Three days later, a boy was flying a kite on Vintem Hill when he discovered two bodies, partially covered with grass and dressed strangely. The bodies were clad in identical formal suits, waterproof coats, and eyeless lead face masks of the type to protect from radioactivity. He ran immediately to the local police station. Due to Vintem Hill's rugged terrain, the police had to return the next day with a rescue team. While at the scene, the police recovered several curious items, including a plastic bag containing two wet towels and a small notebook with unusual entries: 16:30 be at agreed place, 18:30 swallow capsules, after effect protect metals wait for mask signal. The money for the automobile was never found.

Though in a state of advanced decomposition, it was apparent neither man had suffered trauma or died a violent death. Due to their condition, it was impossible for the coroner to determine what the contents of the capsules they took were, toxic or not. The combination of all the events and strange collection of items and dress, have made it impossible to discern the method or circumstance of their demise, but the inevitable UFOs come up in any discussion.