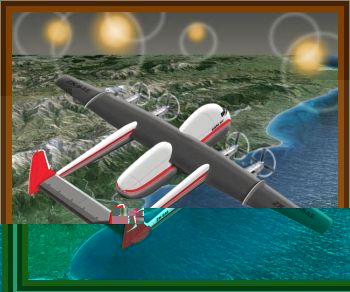 The Kaikoura Lights is a name given by the New Zealand media to a series of sightings that occurred in December 1978, over the skies above the Kaikoura mountain ranges of the northeastern South Island of New Zealand. These sightings began on December 21 when the crew of a Safe Air Ltd cargo aircraft began observing a series of strange, lighted objects around their Armstrong Whitworth AW660 Argosy aircraft on several flights.

The first sighting began when the crew of a cargo plane noticed a series of lights that tracked along with their aircraft for several minutes and then disappear, only to appear somewhere else. The pilot was Captain Bill Startup, a very experienced flyer and the co-pilot was Bob Guard. They described some of the objects of the size of a house and the others small but brilliant flashing lights. These objects appeared on the air traffic controller radar in Wellington and also on the radar in the on board the aircraft. The objects were also seen by hundreds of people on the ground.

On December 30, 1978, a television crew from Australia got permission to shoot some background film for a network show on interviews about the sightings. Quentin Fogarty, T.V. reporter, stated that he saw a row of five bright lights which were pulsating and grew from the size of a pinpoint to that of a large balloon. The whole sequence was then repeated, the lights now appearing over the town of Kaikoura, between the aircraft and the ground. At this stage, David Crockett, cameraman, was wearing the headphones and was warned by Wellington control that an unknown object was following the Argosy, the pilot immediately turned the plane 360° in order to ascertain what had been behind them.

The people aboard the aircraft saw nothing but yet once more Wellington control warned them:

Sierra Alpha Eagle, you have a target in formation with you… target has increased in size. At this, the crew and passengers saw lights outside of the aircraft but were unable to film them because of interference by the plane's navigation lights. When the navigation lights were turned off, however, everyone aboard the aircraft saw a big, bright light which Crockett was able to capture on his hand held camera. In order to do this Crockett had to exchange seats with Bob Guard, causing the resultant filming to suffer from the effects of camera shake. For many minutes at a time on the way to Christchurch, the unidentified objects were simultaneously watched by 5 observers on the flight deck, tracked by Wellington Air Traffic Controllers, and filmed in color by the television crew. One of the objects followed the cargo aircraft almost until landing. The cargo plane then took off again with the television crew still on board, this time for Blenheim. When the aircraft reached about 2000', it encountered a gigantic lighted orb, which fell into station off the wing tip and tracked along with the cargo aircraft for almost quarter of an hour, while being filmed, watched, tracked on the aircraft radar and described on a tape recording made by the TV film crew.