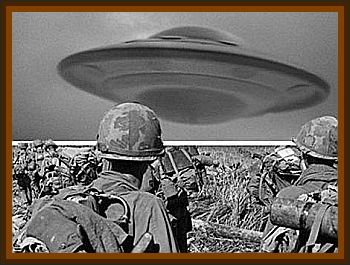 It is interesting that these reports make mention of enemy helicopters, as this was a term used so often to describe any unidentified lights in the sky in Vietnam that it became sort of a code word for UFO, regardless of any relation the object had to an actual helicopter, becoming sort of a catch all phrase for anything weird in the sky.

The fact that the Viet Cong were not known to use helicopters made it a perfect way to explain discreetly when men were seeing something in the sky that shouldn't be there.

On October 16, 1973, the USAF Chief of Staff, General George S. Brown, gave a press conference in Illinois where he addressed this terminology to some extent when asked about UFOs in Vietnam, saying:

They were seen up around the DMZ in the early summer of 1968. And this resulted in quite a little battle. And in the course of this, an Australian destroyer took a hit and we never found any enemy, we only found ourselves when this had all been sorted out. And this caused some shooting there, and there was no enemy at all involved but we always reacted. Always after dark.

Another comment on the matter was made by a patrol boat captain by the name of Bill Cooper, who served in Vietnam from 1967 to 1969. During a UFO conference in Los Angeles in 1989, Cooper would say of his own experiences:

After about five months I was sent up north to the DMZ, to a place called Qua Vieaf, perhaps Qua Viet, on the Tacan river.

It was while there that I discovered that there was a tremendous amount of UFO and alien activity in Vietnam. It was always reported in official messages as Enemy Helicopters.

Now any of you who know anything about the Vietnam war know that the North Vietnamese did not have any helicopters, especially after our first couple of air raids into North Vietnam during 1965. Even if they had, they would not have been so foolish as to bring them over the DMZ, because that would have ensured their demise.