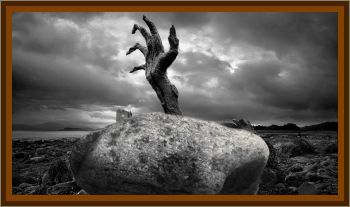 Indeed. The so called Bennington Triangle is a vaguely defined, and decidedly not triangular, area in southwestern Vermont that has gained renown as an epicenter of weirdness and tragedy. Just north of Bennington, the region has been a hotbed of alleged UFO and Bigfoot sightings and legends of man-eating rocks. One fanciful bit of folklore even grants the area its own nightmarish beast: the red eyed Bennington Monster.

But the Triangle's most disturbing occurrences, and the most grounded in documented fact, are its numerous strange and unsolved disappearances.

At the heart of Bennington Triangle lore is Glastenbury Mountain. The 3,700' peak is part of the 400,000 acre Green Mountain National Forest and home to the ghost town of Glastenbury.

During Vermont's logging boom in the mid 1800s, Glastenbury's two primary settlements, South Glastenbury and Fayville, thrived as part of the region's timber and charcoal industries. By the late 1880s, however, much of the mountain had been clear cut, and the town's population rapidly declined. In 1889, the railroad line from Bennington to Glastenbury stopped operating, effectively cutting off the town from the world.

In 1894, trolley service was restored in an expensive effort to develop South Glastenbury as a tourist attraction. A resort and casino opened there in the summer of 1898. But a flood that winter destroyed the train tracks running along Bolles Brook. The resort was abandoned and fell into disrepair.

The State of Vermont unincorporated Glastenbury in 1937. All that remains of the two settlements are the stone foundations of the sawmills and a decrepit footbridge over the brook. The mountain has reclaimed the rest, creating a perfect setting for ghoulish tales.

Between 1945 and 1950, eight disappearances were documented on or near Glastenbury Mountain. They remain unsolved. The most famous case is that of Paula Jean Welden, who disappeared without a trace on December 1, 1946.

The Bennington College student went for a day hike on the Long Trail and never returned. A massive three week search was fruitless, though criticism of the flawed methodology of that manhunt ultimately led to the formation of the Vermont State Police.

Welden was last seen wearing red, which birthed the local belief that donning crimson on the peak is bad juju. It might not be the first such superstition Glastenbury Mountain has inspired.

Though no evidence to support the claim was found, local lore holds that Native American tribes avoided the treacherous mountain, believing it cursed.

Numerous vanishings have been reported since Welden's, including that of a trio of hunters in 1981, they were never found.

I'm surprised more people haven't been lost up there, says Tyler Resch. A former editor of the Bennington Banner, he currently works as a research librarian at the Bennington Museum.

Given the mountain's remote and rugged terrain, Resch considers it a wonder more hikers and hunters haven't gone missing. However, he doesn't believe the mountain or settlements are haunted.

We call them ghost towns, which inevitably raises the whole supernatural thing for those who are inclined that way, Resch says, but he notes he's never experienced anything strange or spooky on Glastenbury. He maintains that there has been just one disappearance in Glastenbury proper: 74 year old guide Middie Rivers vanished on the mountain while leading a hunting party in 1945.

I'm a realist, Resch explains. I deal in documentation in a library, and I can't document supernatural stuff.

Joe Citro might disagree, given that he's built a career on documenting stories of the supernatural in Vermont. Citro is a folklorist and the author of several books on mysterious happenings in Vermont, a few of which cover strange events in and around Glastenbury.

The disappearances around Glastenbury Mountain need not be explained as paranormal, Citro states. From abandoned wells to deep mountain crevasses, the region offers all manner of mundane ways for a person to go missing. Things get spooky, he says, when those poor souls are never found. That's eerie. Uncanny, Citro says. And it leaves people feeling as if dark forces might be at work.

The decades of reports of Bigfoot like creatures and unexplained lights, sounds and smells, among other odd phenomena attributed to the Glastenbury region, only enhance the Bennington Triangle's sinister allure.

Separate, unconnected events are linked in the imagination, and a creepy story is created that is greater than the sum of its parts, says Citro, seeming to downplay the legend he has helped to popularize.

If Vermont's preeminent ghost story teller himself is dubious, perhaps there's reason for skepticism about Glastenbury and the Bennington Triangle