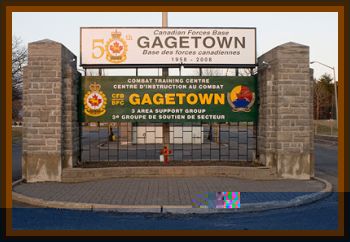 One night, while on my annual training exercise, I was in the woods, many miles from the nearest town, but amongst thousands of U.S. & Canadian Army Reservists on a base called Gagetown.

I was dropped off a mile or two from camp, to guard an ammunition dump in a clearing of about 300' by 500', surrounded by tall trees. The moon was full and the sky was clear.

At 11:20 p.m., I had the chilling sensation someone had snuck up on me and was standing next to me, looking at me. It sent a slight chill through me. I looked up to the right and there, about 300' past the treeline, an enormous craft arose in the vicinity of a small lake/pond. I could see it plain as day and knew immediately it was an alien space craft.

In the bright moonlight, I could clearly see the entire craft, which was longer than a 747 or C-130, possibly oval or round, and tapered towards the tail. There were 3 sets of lights in a 120° arc around the front of the craft, which appeared to be windows, but may have been headlights.

I was paralyzed with fright and tried not to move, lest be seen. I slowly turned my head to watch the craft pass by. I watched it until it had gradually disappeared over the treeline.

After it had passed, I could hear the faint static like sound of a jet type engine, however the craft moved far too slowly to be a jet and the sound was barely audible, unlike a jet. There were no runways, where it took off, it had to come out of the lake or another clearing past the trees.

Having seen many helicopters throughout my training, and ridden in them, I can say without equivocation this was no helicopter. With the bright moonlight, there is no doubt in my mind this was neither a commercial nor military craft known to the public, even now, over 30 years later.

Another soldier was on post about a ¼ mile away at another ammo dump.

We had agreed beforehand to pick up our field phones at 11:30 p.m. to make sure we were both awake. Our exact conversation went:

Me: Did you see that?

Him: Thank God you said that.

This incident was never reported to the military because our fellow reservists thought it was a joke we had both concocted and we eventually dropped it. But to this day, I shudder when I think of it.