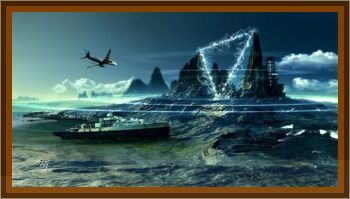 The Devil's Sea and the Dragon's Triangle located in the Philippine Sea off China's eastern coast is known for vanishing ships and seamen similar to the legendary Bermuda Triangle. The area, which can be marked off on a map by connecting Japan, Taiwan, and Yap Island, has become known as the Dragon's Triangle, after a centuries old Chinese myth. According to the myth, dragons live deep beneath the surface and their movement can suddenly churn up waves, whirlpools, thick fog, and sudden storms.

In 1950, Japanese officials declared the triangle a danger zone for shipping, Japan lost five vessels, carrying a total of more than 700 sailors during the peacetime years between 1952 and 1954. Investigations later found that the some vessels vanished outside of the Devil's Sea.

In 1952, a research vessel, the Kaio Maru No. 5, sent by the Japanese government to investigate the troubled waters, vanished without a trace, and 22 crewmen and nine scientists were lost.

Like the Bermuda Triangle, the Devil's Triangle area may be volatile, subject to sudden weather changes and ocean swells not yet understood. Undersea volcanoes are believed to influence the area's sudden environmental changes. Others cite mikakunin hiko-buttai, Japanese for UFOs.