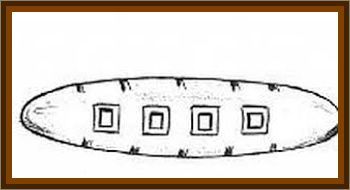 The Cressy sighting remains as one of Tasmania's best known UFO sightings. The cigar shaped mothership, and attendant disks were witnessed by the local Church of England minister, the Reverend Lionel Browning and his wife, about 6:10 p.m. on a cloudy evening.

This case was investigated by the Royal Australian Air Force, details were taken by the Victorian UFO Society, whilst Prof. James E. McDonald, senior Physicist in the Dept. of Meteorology at the University of Arizona, interviewed Rev. Browning in 1967.

TUFOIC published details of the sighting and other events in the area at that time in its Annual Report for 1970, with a more complete account in its Cressy Revisited publication.

The sighting was the page one story in the Launceston Examiner of October 10, 1960. The sighting prompted questions in the Australian parliament and was mentioned in various books and journals both in Australia and overseas.

Subsequently the Rev. Browning became the patron of the Tasmanian Unidentified Flying Objects Investigation Center when it was formed in 1965. He remained interested in Tasmanian sightings until his departure from the state in 1990. Rev. Browning travelled to Melbourne soon after the 1960 sightings to present details of the case to a VUFORS meeting.

Cressy is a small country town in the rural Northern Midlands of Tasmania about 18 miles south west of Launceston. The surrounding area is mainly pastoral and relatively flat, although the Western Tiers some 12 miles to the south west rise to over 4000'. A similar distance to the north east of the town is Launceston Airport.

The RAAF files had a full account of the sighting together with a sighting report form.

At approximately 6:10 p.m. on the 4th of October 1960, he and his wife were standing in the dinning room of their Cressy home. They were looking out through the window at a rainbow over some low hills about 7 miles to the east. The hills, the highest of which are about 1300', were partly obscured by low cloud and rain. As they were looking at the scene, his wife drew his attention to a long cigar shaped object which was emerging from a rain squall.

The object was a dull grayish color, had 4 or 5 vertical dark bands around its circumference and at regular intervals along its length had what looked like a short aerial array which projected outwards and upward from the northern facing end of the object.

The craft seemed to be slightly longer than a Viscount aircraft which Rev. Browning frequently sees flying in that area and he therefore estimated the object's length at about 100'. The outline of the object was well defined and was even more so a little later when it had as a background the tree covered slopes of a rain free area of the hills.

Rev. Browning estimated from landmarks below the object, that it was over Panshanger Estate owned by the Mills family and was probably 3 to 4 miles distant.

The object, after emerging from the rain squall moved on an even keel in a northerly direction at an estimated speed of 60 to 70 miles per hour at a constant height of about 400'. His estimate of the speed of the object was made by comparing its rate of movement with that of Viscount aircraft which he has seen flying in the area.

His estimate of the height of the object was by comparison with the height of the hills behind it. The craft moved approximately 1½ mile north, also estimated by reference to land marks below it, and then abruptly stopped. Within seconds, it was joined by 5 or 6 small saucer like objects which had emerged at high speed from the cloud above and behind the cigar shaped object.

The reverse movement was at about the same speed and height as during its outward movement. In all, the cigar shaped object had been visible for approximately two minutes and the small objects for about one minute. Neither the Rev. Browning or Mrs. Browning heard any unusual noise during the period of the sighting.

Rev. Browning and his wife watched the area for several minutes after the disappearance of the objects into the rain squall but there was no reappearance. Rev. Browning then telephoned the Control Tower at Western Junction, Launceston, Airport and reported the sighting.

The weather at the time of the sighting was overcast but fine after past rain at Cressy with showers still to the east in parts.

Rev. Browning stated that on October 9th he gave a full report of the sighting to the Launceston Examiner. A sketch of the object was superimposed on a photograph taken through their dinning room window.

The following day, October 10th, the story was published in the paper. The published report apart from giving the length of the object as 300' instead of 100' and having stated that he knew of other witnesses was accurate. He also stated the artist's impression depicted a fairly accurately the shape, size and appearance of the objects but they should have been shown as being below and not above the skyline.

Rev. Browning stated that since making the sighting public, he has received several reports of believed sightings of flying objects and has also received many reports of loud explosions. He himself heard such an explosion at 9:30 p.m. on October 27th. He is of the opinion that it was too close and loud to have been from an area 10 miles distant where the Hydro Electric Commission does rock blasting. Rev. Browning was of the opinion the explosions are someway associated with the flying objects seen by him and his wife.

Rev. Browning said that prior to his and his wife's sighting of the unidentified flying objects he had been skeptical about reports of such objects but now he and his wife are convinced such objects exist.

Michael Hervey's book, UFOS Over the Southern Hemisphere mentions the Cressy sightings and that another eye witness a Mrs. D Bransden who said:

It was a fantastic sight, like a lot of little ships flocking around a bigger one.

In TUFOIC's 1970 report gathered from the Rev. Browning and his notes on the case, a Mrs. Bransden is also mentioned as having seen the cigar from near the Rectory. A young child is also reported as having seen the objects. Unfortunately no further information is know about the Bransden sighting.

Two hours after the sighting, many outlying residents in the Cressy/Perth district heard a loud explosion. It was too loud to be from Poatina, one of the residents, Mrs. J. Robson of Barlington estate claimed. She said it was a loud explosion like someone banging heavily on a wall. She said she could hear the earth shake.

Mr. B. Spencer of Woodlands, Cressy, said the explosion shook the house. It was followed by rumbling vibrations. It seemed to come from towards the Panshanger estate over which Rev. Browning had made an earlier sighting.

The Civil Aviation Department said there were no aircraft in the vicinity at the time of the report. They had made a report to headquarters of Mr. Browning's sighting.

For several weeks following the Cressy sighting there were numerous reports of strange airborn objects in the Longford, Cressy, Poatina, and Evandale districts.

In 1990 TUFOIC obtained copies of the RAAF sighting form completed by Rev. Browning but the form was undated.

Professor McDonald received a letter from the RAAF officer who did the interrogation of the Brownings. The Brownings impressed the officer as being mature, stable, and mentally alert individuals who had no cause or desire to see objects in the sky other than objects of definite form and substance.

The meteorological summary for October 4th describes a small depression over the Central Plateau with a front extending to the east of Flinders Island. Light to moderate rain was experienced ahead of the front with rain clearing after 3:00 p.m. However, extensive cloud build up were associated with the trough along the Western Tiers, south west of Cressy, during the late afternoon. Thunderstorm activity was reported from areas near the Tiers.

The RAAF summary explained the case as Astronomical. Moon rise would have been visible shortly after 6:00 p.m. in an east south east direction, as the objects were seen near the skyline, the moon's reflection on scud type cloud associated with the rain squall were responsible for the sighting.

Rev. Browning dismissed the RAAF's explanation. The moon he said would have been competing with a glorious sunset, whilst the easterly skyline was not visible due to rain covering the Ben Lomond area.

A check reveals that the sun was indeed about to set in the western sky, and if anything would have been the more likely of the two astronomical bodies to light up the sky. Rev. Browning told Professor McDonald that the sun was illuminating the objects, there being a distinct difference in tone between the dull grey of the larger object and the shiny, metallic luster of the smaller disk- like objects.

The moon was just rising but at the time of the sighting would have been at a mere 6° to the east. In fact it may have had trouble at that time in being visible over mountains to the east.

No mention is made if the Brownings heard the explosions two hours later, nor does the RAAF seem to have been informed of these events. Possibly the explosion and rumblings were due to the thunderstorm activity near the Tiers. The residents of the Cressy district were quite used to explosions from the Hydro works at Poatina but these as a rule were daytime occurrences.

It seems a pity that the RAAF did not take a more active approach to the sighting and others reported in the press in subsequent days. A logical step would have been to interview Mrs. Bransden the second witness to the case, from a different view point would she have also seen moonrise reflecting on scud cloud?

The 1960 Cressy case remains a classic sighting of a mother ship and attendant disks, a type of case that seems to have become less frequent in recent times.