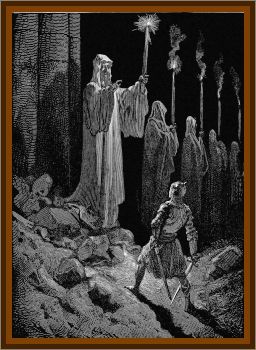 The Legend of Corpse Candles

Corpse candles, or Canwyllau Cyrff, are prolific in Welsh folklore as small lights that float along near the ground, stopping at houses where death is forthcoming, and were directly related to Corpse Roads, which provided a practical means for transporting corpses, often from remote communities, to cemeteries that had burial rights, such as parish churches and chapels of ease, which were a church building other than the parish church, built within the bounds of a parish for the attendance of those who cannot reach the parish church conveniently.

They may be seen as erratic, seeming to disappear and reappear behind the percipient. They appear on or near the earth, in the air, over lakes, or on the sea. Corpse candles seemed to hover around these roads, usually at dusk. It follows the path of a future funeral procession, it appears to a doomed party halfway between the deceaseds home and his grave.

Corpse candles, as people who saw them would testify, invariably travelled in a straight line, taking the direct route from the home of the deceased to the church or graveyard. They went over mountains, valleys, even rivers and marsh land, never bothering with traditional routes and seeming to be able to travel wherever they wished. Sometimes they would make strange detours that led across fields or woods, at times they would pause and hover over a certain spot, but whatever it did or wherever it went the coffin would do or go in a similar manner.

They may be seen as erratic, seeming to disappear and reappear behind the percipient. They appear on or near the earth, in the air, over lakes, or on the sea.

It was said, that if a Corpse Candle was seen to cross an cultivable field, or hay field then the following crop would be a disaster.

One thing that was vital was never to impede a Corpse Candle or interfere with its progress in any shape or form, if that happened then the guilty party themselves would also end up buried in the churchyard.

Over the centuries it seems that the way a Corpse Candle was regarded has changed from one of acceptance to one of fear and it's probable that this is due to the way dead was and is perceived.

To a superstitious and isolated people, Corpse Candles were thought to have spiritual or supernatural origins. Before long they had become more than just apparitions, they were regarded as manifestations of death.

A series of corpse candles hovering in the air meant that someone, perhaps in a house near the lights, or even the person witnessing them, was going to die. Some said the candles would follow the route that the funeral procession would later take along the corpse road. Sometimes, legend declared, the lights would not be simple balls of fire but would appear as actual candles. Occasionally they were accompanied by a hollow skull.

There are dozens of stories about corpse candles in Wales, most dating from the 18th and early 19th centuries. Anything earlier has long been turned into legend where it is almost impossible to separate the truth from the legend.

One such tale is as follows:

Three men were tossed out of their coracle (small boat),on the river near Llandeilo. They were drowned in the accident. It was said that just a few days before, passengers on the Carmarthen-Llandeilo coach had seen three corpse candles hovering above the water at the exact spot where the three men drowned.

Most writers or historians from the 19th century seem happy just to relate the stories without trying to account for the phenomenon. An exception was James Motley whose account of a corpse candle experience is quoted in Richard Holland's book South Wales Ghost Stories. In his 1848 account of corpse candles, Motley wrote that they:

Seem to be of electrical origin, when the ears of the traveller's horse, the extremity of his whip, his spurs or any other projecting points appear tipped with pencils of light… the toes of the rider's boots, and even the tufts of hair at the fetlocks of his horse, appeared to burn with a steady blue light, and on the hand being extended, every finger immediately became tipped with fire.

For centuries there has been the believe that life is represented by light and fire and that the life soul is a flame that lives inside ones body, hence the analogy, light of my life. When death occurs the soul leaves the body in the form of a flame and it was/is believed that this light or soul of the departed would return to serve as an omen of someone's impending death.

By no means is this tradition exclusive to Dartmoor, but it does appear in Devonshire that things are a little different as the Corpse Candle will only visit a dying person if they have relatives or children already buried in the churchyard.

During Medieval times it was regarded vital to have a good death, which basically meant having the opportunity to prepare oneself both spiritually and practically before dying. This meant having an opportunity to bring ones earthy business to a tidy conclusion, it was a time to make or revise wills and more importantly to make ones peace with God and to receive the last rights. The deathbed would also be a chance to spend final moments with family and friends and to give them the comfort of knowing a good death was had. The danger of a bad death was that the departed having not prepared themselves would end up in Purgatory where their soul would languish until released into heaven.

So, in early times any advance notice of death would allow a person to prepare themselves sufficiently to ensure a good death and Corpse Candles were such a warning, hence they were not feared. Over time the conception of a good death seemed to merge into the sole existence of all deaths being bad and something to be feared which likewise changed people's attitudes to Corpse Candles.

There seems to be a distinction between Corpse Candles and Jack O' Lanterns insomuch as the latter tends to be the souls of the departed that are intent on harm or locate themselves at the place where the person died.

With the coming of heavy industrialisation to Wales, legends like the corpse candles and the phantom funerals began to die out. Now it is only in the firelight of a winter evening, or a night by a campfire, that they re-emerge, as potent and as terrifying as they were in times long gone.

A Poem About Corpse Candles