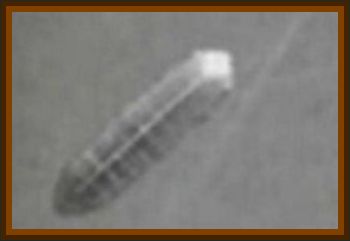 2 F-94's scrambled to intercept UFO that a GOC spotter saw heading SW over Boston, no radar contact and F-94's searched area found nothing.

Erwin W. Nelson and wife at Lynn, 9 miles NE of Boston, at 7:31 p.m. to 7:34 p.m. noticed two vapor trails from the climbing jets, looked around, saw in the W a bright silver cigar shaped object about six times as long as it was wide heading SW over Boston at a very high altitude, speed a little faster than the two jets.

An identical UFO was following the first some distance back. No vapor trails. Witnesses watched the F-94's search back and forth far below the UFOs.

At two points object seemed to hover for a few secondss, then continued at about 40,000'. Object path intersected contrails of the two jets heading SE.

Metcalf lost sight of object on his way to the tower after a few minutes then caught sight again at about 7:40, noting it had increased distance considerably, but lost it at the tower and unable to see it with unaided eye or 7 X 50 mm binoculars.