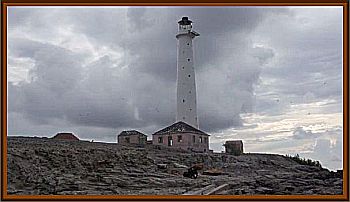 The Great Isaac Lighthouse is located on Great Isaac Cay, a small island only accessible by boat about 20 miles NNE of Bimini. The 152' tall light house was built as an exhibit for the Great London Exposition of 1852 and was originally known as Victoria Light in honor of the then reigning Queen of England. A few years later, it was shipped in pieces and constructed at its current home in 1859.

Rumor claimed that the lighthouse was originally bound for Sri Lanka but the trip ended in failure, though no one knows exactly what went wrong. The bad luck continued during its construction on Great Isaac Cay and is the basis for one of the known ghosts on the island. While the light was being built, a British supply ship wrecked while delivering parts. Everyone on the ship survived except one person- the ship's boy, who was eaten by sharks. People have claimed to have seen his spirit wandering the island.

Until 1969, the barren island was occupied by 2 lighthouse keepers: Ivan Major and B. Mollings. On August 4, 1969, the lighthouse station was discovered abandoned. There was no sign of the keepers. No distress calls had been made, there were no sightings and an investigation shed no light on the mystery. To this day, no one knows what happened to the men. Many believe it's another disappearance courtesy of the Bermuda Triangle.

After their disappearance, the Great Isaac Light was automated, shining a white beam every 15 seconds to sailors up to 23 nautical miles away. The rest of the compound’s buildings have been left to crumble. Adding to the island’s macabre history, Nineteenth century lore has it that a ship wrecked on Great Isaac Cay, killing everyone aboard except one young infant. Locals claim that the infant’s mother, known as the Grey Lady, can still be seen roaming the island, and her wails of sorrow can be heard on full moons.

Though the cay’s grounds are open to the public, the bottom few stairs in the tower are missing and the storage bunkers and buildings are locked.