Bermuda Triangle, Not That Special 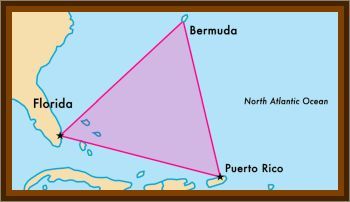 The Bermuda Triangle, also known as the Devil's Triangle, is a loosely defined region covers about 500,000 square miles of ocean off the southeastern tip of Florida, where a number of aircraft and ships are said to have disappeared under mysterious circumstances.

Most reputable sources dismiss the idea that there is any mystery. The vicinity of the Bermuda Triangle is one of the most heavily traveled shipping lanes in the world, with ships frequently crossing through it for ports in the Americas, Europe, and the Caribbean Islands. Cruise ships and pleasure craft regularly sail through the region, and commercial and private aircraft routinely fly over it.

Popular culture has attributed various disappearances to the paranormal or activity by extraterrestrial beings. Documented evidence indicates that a significant percentage of the incidents were spurious, inaccurately reported, or embellished by later authors.

When Christopher Columbus sailed through the area on his first voyage to the New World, he reported that a great flame of fire, probably a meteor, crashed into the sea one night and that a strange light appeared in the distance a few weeks later. He also wrote about erratic compass readings, perhaps because at that time a sliver of the Bermuda Triangle was one of the few places on Earth where true North and magnetic North lined up.

Joshua Slocum disappeared on a 1909 voyage from Martha’s Vineyard to South America. Though it’s unclear exactly what happened, many sources later attributed his death to the Bermuda Triangle.

An especially infamous tragedy occurred in March 1918 when the USS Cyclops, a 542' long Navy cargo ship with over 300 men and 10,000 tons of manganese ore onboard, sank somewhere between Barbados and the Chesapeake Bay. The Cyclops never sent out an SOS distress call despite being equipped to do so, and an extensive search found no wreckage.

Only God and the sea know what happened to the great ship, U.S. President Woodrow Wilson later said.

In 1941 2 of the Cyclops’ sister ships similarly vanished without a trace along nearly the same route.

The SS Marine Sulphur Queen, a tanker ship carrying molten sulphur, disappeared off the southern coast of Florida in 1963. The crew of 39 was all lost and no wreckage from the tanker was ever found.

While the disappearance of the ship is mentioned in several books about the Triangle, authors don't always include that the Coast Guard concluded that the vessel was in deplorable shape and should have never gone to sea at all. Fires erupted with regularity on the ship. Also, this class of vessel was known to have a weak back, which means the keel would split when weakened by corrosion causing the ship to break in 2. The ship's structure had been further compromised by a conversion from its original mission as an oil tanker to carrying molten sulphur. The conversion had left the vessel with an extremely high center of gravity, increasing the chance that it would capsize. The SS Marine Sulphur Queen was all in all a disaster waiting to happen and it seems unfair to blame its demise on the Bermuda Triangle.

A pattern allegedly began forming in which vessels traversing the Bermuda Triangle would either disappear or be found abandoned. Then, in December 1945, 5 Navy bombers carrying 14 men took off from a Fort Lauderdale, Florida, airfield in order to conduct practice bombing runs over some nearby shoals.

But with his compasses apparently malfunctioning, the leader of the mission, known as Flight 19, got severely lost. All 5 planes flew aimlessly until they ran low on fuel and were forced to ditch at sea. That same day, a rescue plane and its 13 man crew also disappeared. After a massive weeks long search failed to turn up any evidence, the official Navy report declared that it was:

As if they had flown to Mars.

On a clear night in June 5, 1965, a seasoned flying crew from the Air Force Reserve Command's 440th Airlift Wing C-119, under the command of Major Louis Giuntoli flew from Milwaukee on the heavily traveled Yankee Route, on their way to Grand Turk Island in the Bahamas. They landed as scheduled at Homestead Air Force Base in Florida at 5:04 p.m. and spent 2 hours and 43 minutes on the ground.

Then they took off at 7:47 p.m. and headed south to the Bahamas, but never reached their destination.

There was no indication of trouble and all radio communication was routine. When they didn't land, radio traffic controllers started calling Plane 680 but didn't receive a response. Only a few scraps of debris were found, and those could have been tossed out of the cargo plane. Among those on board was an expert maintenance crew, so if there was a mechanical problem on the flight, there were plenty of people to take care of it. There was no explanation for the disappearance of Plane 680.

By the time author Vincent Gaddis coined the phrase Bermuda Triangle, in a 1964 magazine article, additional mysterious accidents had occurred in the area, including 3 passenger planes that went down despite having just sent all’s well messages.

Charles Berlitz, whose grandfather founded the Berlitz language schools, stoked the legend even further in 1974 with a sensational bestseller about the legend. Since then, scores of fellow paranormal writers have blamed the triangle’s supposed lethalness on everything from aliens, Atlantis and sea monsters to time warps and reverse gravity fields, whereas more scientifically minded theorists have pointed to magnetic anomalies, waterspouts or huge eruptions of methane gas from the ocean floor.

In 1975 Larry Kusche, a librarian at Arizona State University, reached a totally different conclusion. Kusche decided to investigate the claims made by these articles and books. What he found he published in his own book entitled The Bermuda Triangle Mystery, Solved.

Kusche had carefully dug into records other writers had neglected. He found that many of the strange accidents were not so strange after all. Often a Triangle writer had noted a ship or plane had disappeared in calms seas, when the record showed a raging storm had been in progress. Others said ships had mysteriously vanished, when their remains had actually been found and the cause of their sinking explained.

In one case a ship listed missing in the Triangle actually had disappeared in the Pacific Ocean some 3,000 miles away. The author had confused the name of the Pacific port the ship had left with a city of the same name on the Atlantic coast.

More significantly, a check of Lloyd's of London's accident records by the editor of Fate in 1975 showed that the Triangle was no more dangerous than any other part of the ocean. U.S. Coast Guard records confirmed this and since that time no good arguments have ever been made to refute those statistics.

So many argue that the Bermuda Triangle mystery has disappeared, in the same way many of its supposed victims vanished.

According to Lloyd's records, 428 vessels were reported missing throughout the world between 1955 and 1975, and th­ere was no greater incidence of events occurring in the Bermuda Triangle than anywhere else in the world.

Rob MacGregor and Bruce Gernon include reports of an electronic fog that both men experienced while flying in the Bermuda Triangle.

On December 4, 1970, Gernon and his father were flying to Bimini in clear skies when they saw a strange cloud with almost perfectly round edges hovering over the Miami shore. As they flew over it, the cloud began spreading out, matching or exceeding their speed.

At 11,500', they thought that they had escaped the cloud, only to discover that it had formed a tunnel. It appeared the only way they could escape the cloud was to go through the tunnel. Once inside, they saw lines on the walls that spun in a counterclockwise direction. Gernon's navigational instruments went haywire and the compass spun counterclockwise.

He realized that something very bizarre had happened. Instead of the clear blue sky that we expected at the end of the tunnel, everything appeared a dull, grayish/white. Visibility appeared to be about 2 miles, but there was absolutely nothing to see, no ocean, no horizon, no sky, only a gray haze.

When Gernon contacted Miami Air Traffic Control to get radar identification, the controller said that there were no planes on radar between Miami, Bimini and Andros.

After several minutes, Gernon heard the air traffic controller report that a plane had been spotted directly over Miami. Gernon didn't think he could possibly be over Miami Beach, because it usually took 75 minutes to get to Miami and only 47 minutes had passed. At this same time, the cloud tunnel began to peel away in what he described as ribbons of fog.

The instruments began operating normally and Miami Beach was directly below them. This loss of time, confirmed by their watches and the plane's clock, made Gernon believe that the electronic fog had time travel qualities. Gernon experienced the fog one more time in flight with his wife.

Many other pilots have had similar experiences in the area. Gernon believes that powerful electromagnetic storms from within the Earth break through the surface and come into the atmosphere where they soon disappear, leaving electronic fog.