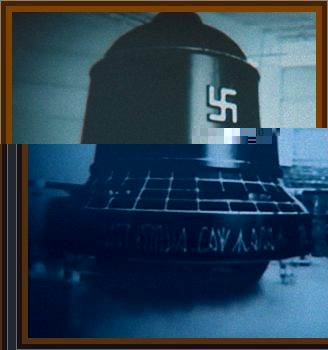 Secret facilities, hidden deep in northern Germany, leaked and declassified documents, anecdotal evidence and urban legend, all of it pointing in one direction.

Die Glocke or in English, The Bell is believed to have been Nazi Germany's famed Wunderwaffe or Wonder Weapon.

It was the culmination of Nazi Germany's brightest scientific minds. The same people who brought us the V1 and V2 rockets, the V2 being the first manmade object to leave our atmosphere and plunge into the cold depths of space, are also thought to have been involved in the development of a weapon so terrible that some accounts describe factions of these scientists refusing to release technical plans to Nazi leaders for fear of what might be done with the technology.

Incidentally, these were also the men who eventually helped to design and build the first atomic bomb.

The Bell, however, is a complete mystery, though there is no shortage of conspiracy surrounding it.

First word of Die Glocke was presented to the free world in 2000 by one Igor Witkowski, a polish author who wrote a book titled Prawda O Wunderwaffe, or The Truth About The Wonder Weapon.

Witkowski claimed that he met with an unnamed Polish intelligence contact in 1997, from which he reports to have been shown classified Polish government documents detailing Nazi weapons research projects. Die Glocke was one of those projects.

The story of Die Glocke was later picked up by British author Nick Cook who added his own flavor to the tale in his own book The Hunt for Zero Point.

Whatever the truth about “The Bell”, conspiracy theorists and even some in the general scientific community are convinced that the Bell did in fact exist and that it was a machine of incredible power.

For the record, no one really knows what Wundwerwaffe actually was, or even if Nazi Germany was really developing anything other than conventional weaponry. Most mainstream science and historical experts are adamant that the V series rockets were the pinnacle of German technology at the time, and that the Bell is a simple urban legend.

Most who believe that the Bell exists, or existed at some point, are convinced that it was a machine built for a fantastic and sinister purpose. Many believe that it was either a working time machine or an antigravity machine.

If you believe what you see on TV and read on the internet, the Third Reich was undertaking some rather nefarious research and development just prior to the end of the war in 1945. That is, aside from their ballistic and chemical weapons programs.

Allegedly an experiment was carried out by Third Reich scientists working for the SS in a German facility known as Der Riese, “The Giant”, near the Wenceslaus mine and close to the Czech border.

Die Glocke is described as being a device made out of a hard, heavy metal, approximately 9' wide and 15' high having a shape similar to that of a large bell.

According to Cook, this device ostensibly contained two counter rotating cylinders which would be filled with a mercury like substance, violet in color.

This metallic liquid was code named “Xerum 525” and was otherwise cautiously “stored in a tall thin thermos flask a meter high encased in lead”.

Additional substances said to be employed in the experiments, referred to as Leichtmetall light metal, “included thorium and beryllium peroxides”.

Cook describes Die Glocke as emitting strong radiation when activated, an effect that supposedly led to the death of several unnamed scientists and various plant and animal test subjects.

Based upon certain external indications, Witkowski speculates that the ruins of a metal framework in the vicinity of the Wenceslas mine, aesthetically dubbed “The Henge”, may have once served as test rig for an experiment in “anti gravity propulsion” generated with Die Glocke, others, however, dismiss the derelict structure as simply being a conventional industrial cooling tower.

If we allow our speculations to run wild, we can easily come up with any number of scenarios, from time travel, to manipulation of space time, to antigravity and even to inter dimensional travel.

Some German scientists have gone on record stating that the machine was designed to warp space time and to allow the SS to travel backward through time, though since the majority of the world still speaks English, we can safely say that their plan didn't work…or did it?

To anyone familiar with my work, you already know that I have a penchant for physics, cosmology and time travel, and I would like to put forth a theory of my own.

Dr. Brian Greene, author of The Fabric of the Cosmos, has outlined a thought experiment, wherein one thinks of moments in time as slices of bread in a very long loaf.

Each slice corresponds to the slice behind it and before it, but none other. If you walk along the loaf you can pluck out a slice from anywhere and that slice will be the present. All of the slices before it represent the future and all of the slices behind it are the past. This analogy specifies the direction of time's arrow, and it is only the beginning of my theory.

Travelling forward along the loaf is easy enough, each day, each minute each second of our lives we are doing just that, moving forward through time.

Moving backward however, proves to be difficult. The scientific barriers to backward time travel or retro time travel notwithstanding there is a paradox which must first be overcome before anyone can change time's arrow, it is the Grandfather Paradox.

The Grandfather Paradox says, quite simply:

The same paradox exists for nearly anything you could imagine doing in the past, any changes that might be made, which could have an impact on the life of the traveller, would serve to make retro time travel an impossibility.

There are though, a few ways around this paradox, and they might just relate to The Nazi Bell after all.

First off, there is the idea that the past is unchangeable, so going back in time would have you living your life as you did originally during the time period in question, and were you to travel back beyond your own birth, you would cease to exist.

If this were the case, any changes you made would then play out in an all new and distinct future, thus, if you murdered your grandfather in that timeline, only the “you” who was indigenous to that timeline would suffer for it.

And this finally brings me back to the Nazi's and their wunderwaffe, if one were to subscribe to the idea that the Nazi's had succeeded in building a time machine, with the intent to travel backward in time, for the obvious peril of us all, one has first to consider the Grandfather Paradox. Might it be possible that SS scientists succeeded, and were transported via Die Glocke to an alternate past, and in that parallel timeline are ruling over all mankind?

The above is really a discussion of the quantum physics theory called Many Worlds, wherein every conceivable timeline exists parallel to our own. It purports that every possible configuration of the universe exists and is equally as real as the one we inhabit.