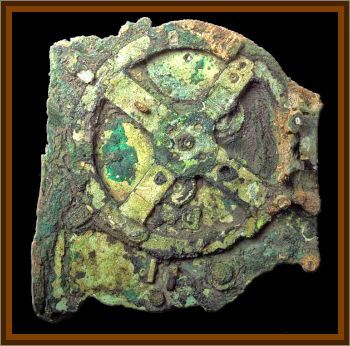 The Antikythera Mechanism was discovered in 1901, onboard a sunken ship by sponge divers off the coast of Greece and Crete. At first they assumed they had found sunken treasure, several died during the dives.

It took scientists a hundred years after its recovery to realize the importance of what had been found, the oldest analog computer ever discovered. Considered to be one of the most amazing artifacts ever found, the Antikythera Mechanism is a computer made of a wooden box housing 30 bronze gears used to determine celestial and astronomical positions. It is believed to have been built in the early 1st. Century BC, an encyclopedia of Greek science and mathematics. Nothing even remotely resembling the Mechanism was seen again until the 14th. Century AD.