Enormous UFO Shaped Like The Giant Cross Of Lorraine 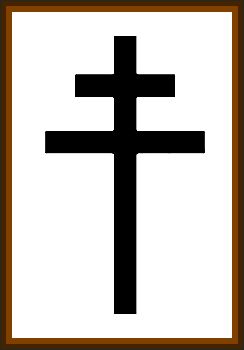 It was in the evening of a day in late May 1974 although I cannot be sure of the exact date. I was a Squadron Leader at the RAF station at Akrotiri in Cyprus.

I was standing with my friend and fellow officer, a flight lieutenant, in the garden of my married quarter on base and we were discussing the plans for an RAF Akrotiri mountaineering expedition to Iran.

It was a moonlit night with a clear sky and no clouds. As we were speaking a rather strange looking craft appeared in the dark sky to the East. It was heading towards us and appeared to have a very large wing span. It was moving at about the same cruising speed as a modern passenger aircraft.

As it came nearer we could see that it was unlike any aircraft we had ever seen. It became clear that it was in the shape of a giant cross of Lorraine and flying in the direction of the top of the cross. It is difficult to estimate its altitude with no reference points but my estimation is at least 10,000'. In size it was enormous and probably at least 10 times bigger than any aircraft in service at that time. The fuselage appeared a grey/black color in the moonlight and there were no lights showing.

It appeared to be constructed from a long thin fuselage and 2 cross members of similar width towards the forward end of the fuselage, hence the two barred cross of Lorraine shape.

The craft was generating no noise and certainly no jet engine noise but from each end of the rear cross member a long plume of blue and yellow flame was emitted. The plumes were nearly as long as the rest of the fuselage. The plumes could imply the craft was in the atmosphere and burning some form of fuel. The craft was travelling in an east to west direction parallel with the southern coast of Cyprus.

Since Akrotiri is a narrow peninsula most of its track would have been over the sea. We watched it overfly us with amazement and then saw it accelerate at enormous speed and disappear from view.

Our immediate action was to dash inside my married quarter and call Air Traffic Control at the base but they had not seen it and had no trace on their radar.

The following day I could not find anyone else who had witnessed this strange sight. Our first reaction was not that we had seen a UFO. But this was during the time of the Cold War and in those days we had no internet to research the spacecraft that had been built.

We assumed the craft was a space station built by the Americans or the Russians and that it was probably burning up after re entering the Earth’s atmosphere. Certainly it looked like a space station and could have been a mother ship.

However, over the course of time it was evident from further investigation that there were no spacecraft of comparable size and structure around in 1974. It was much larger than all space stations which have been in orbit since then. So the deduction is that what we saw was a UFO and I now wish to record our observation for posterity.

As a personal opinion, I do not feel that this was a UFO manned by extra terrestrial beings. Rather I take the view that what we saw in 1974 was a snapshot of a future time and that the craft was manmade by our successors in the future.

This would imply time travel but according to a number of websites on the internet it may be possible for future space travellers to travel back in time using science and technology which are currently unkown today.